A NOOB READS MARVEL’S THE TRIALS OF ULTRAMAN 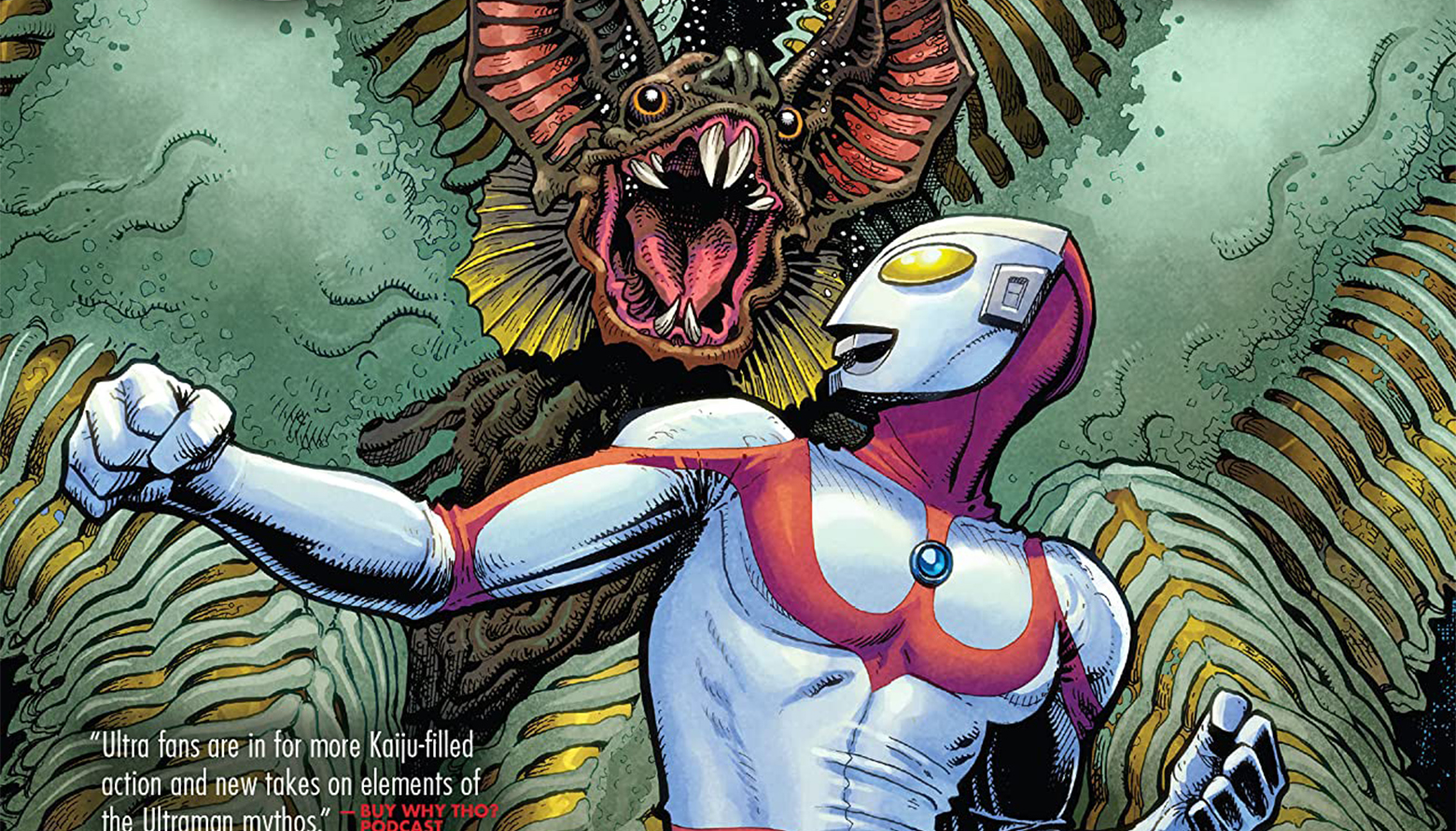 In April of 2021, I began my journey into the Ultraman Universe as a noob with The Rise of Ultraman trade paperback of the Marvel Comics miniseries by Kyle Higgins and Matt Groom. Since then, I was inspired to immerse myself further into the fandom, engaging with all kinds of Ultraman content. Still, though, I am not as seasoned an Ultra Heroes fan as the hardcore audience that has become so loyal to Ultraman Connection. For that reason, I’ve decided to continue exploring the lore with collection of the second five-issue Marvel series, The Trials of Ultraman. The high gloss cover sets the stage for the entire graphic novel with a high-tension tableau drawn by Francesco Manna. We see Ultraman, brought to life with vivid colors by Espen Grundetjern, prepared for battle but still caught off-guard by a Kaiju in what seems to be an alien landscape. This single image actually does a great job of encapsulating the energy of the story as a whole. Shin Hayata is now navigating what it means to work with the Giant of Light on a greater scale than ever before. He might be prepared to a degree, but the stakes are higher now as a consequence of Earth’s brush with fate at the end of The Rise of Ultraman. The world isn’t the same as it once was, and no one knows just who to trust. After the events of Rise, the United Science Patrol’s secrecy has been compromised and Shin Hayata is trying to find balance in his personal life. Enemy organizations and giant monsters alike are attempting to destabilize the USP after the Kaiju Vault was opened and the return of a character who was thought to be lost further complicates all matters. Only Ultraman can handle this mess… Or so it seems. The story covers both intergalactic and intersocial relationships in a way that allows us to connect with Ultraman, a seemingly untouchable hero, on a very human level. Shin is faced with difficult decisions and unexpected situations, some of which are universal experiences such as reconnecting with a cold and angry father, who unfairly blames him for the death of his younger brother, and meeting with a second father of sorts, Dan Moroboshi. Also distant and embittered, we glimpsed Dan in a flashback in the first pages of Rise when he vanished into the Kaiju Vault in the 1960s. Dan now blames the USP for somehow being involved in the creation of the Vault, which turned out to be a terrible decision! Seeing how much we have changed through the eyes of someone else is an ever-sobering experience—especially when it seems to them that we’ve changed for the worse. In the case of The Trials of Ultraman, it is made clear how important those moments really are. But what’s interesting to me is that the Ultra side of Ultraman continues to attempt to raise Shin’s consciousness beyond getting caught up in human grievances. Through the influence of the Ultra, Shin Hayata grapples with but ultimately chooses to protect his own enemies from greater danger. He is pushed to make nuanced, calculated choices, adjusting his his moral executive functioning even at times of crisis (as in caught-in-the-middle-of-a-war level crisis). Also interesting, especially for a Marvel comic, is how the Ultra draws a boundary when it comes to interfering with human conflict. Ultraman is not here to fight criminals, dismantle evil cults, or crusade against corrupt organizations, no matter how horrible they may be. It becomes clear to Shin that he cannot rely on his Ultraman (nor even his support network) to handle his battles for him, he must use what he’s learned to empower himself. While Ultraman’s goal is to protect and defend, he prides himself on not perpetuating the human cycle of violence. In tandem with Shin, Ultraman defeats Kaiju in moments that differ from the Ultraman TV series live-action battles by the amount of conversation and analysis Shin and Ultra engage in together as they throw epic punches. It’s clear that Ultraman does not favor violence but rather resorts to it as a necessity and, at the end of the day, will only pick on creatures his own size. He refuses to be used to give Shin an advantage in exercising his reflexive instincts and instead encourages him to organize his code of conduct with respect to the species he’s dealing with. Shin must codeswitch if you will. The Trials of Ultraman is dynamic, action-packed, fully realized and at the end of the day, a story we have all lived to some extent. It is wildly impressive that as someone who hasn’t fought that many Kaiju in my time, I was able to emotionally connect to someone who does it all the time. Higgins and Groom did an excellent job of translating some of the anxiety many of us feel during these trying times into a narrative that is largely optimistic. The Trials of Ultraman honors the Ultraman franchise’s overarching theme of inspiring hope, not based on physical capabilities, but rather on humanity’s core desire to make the world a better place for one another. Ultraman reminds us all to pay attention to that part in ourselves, no matter how vulnerable it may be. Pick up The Trials of Ultraman trade paperback from comics retailers, bookstores, and Amazon right now. And stay tuned to Ultraman Connection for all the latest from the M78 universe! Evangelia Artemis November 2021   Evangelia is a New York-based freelance writer who draws underground comics, loves anime, and is working on her first novel.