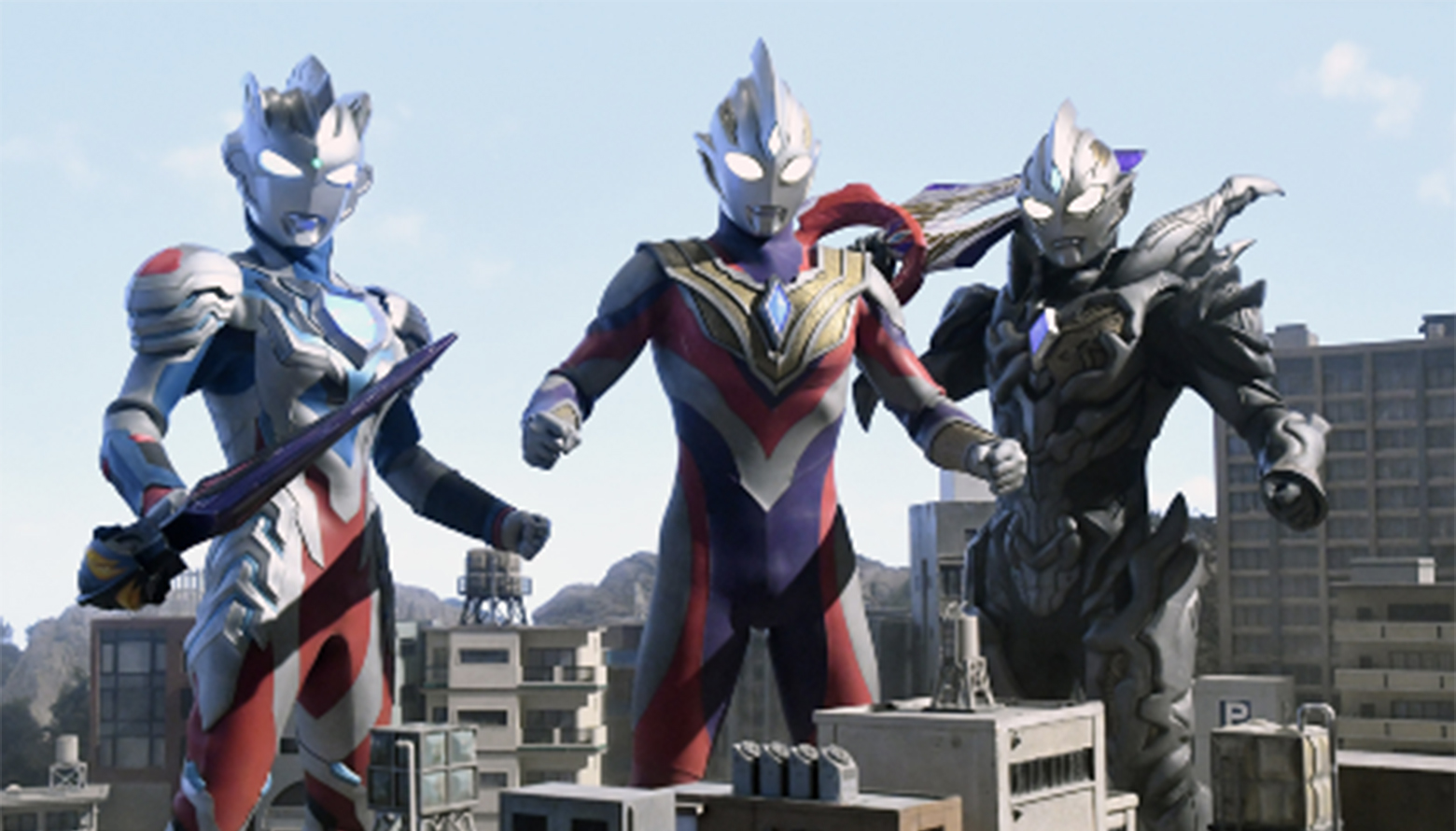 As an official representative of the Ultraman noob community, I felt it was my duty to make Ultraman Trigger Episode Z the next stop on my journey through the Ultraman universe. Directed by Masayoshi Takesue, Episode Z is the most recent Ultraman release, streaming on Tsuburaya Imagination in Japan and made available as a rental on Ultraman Connection a short time ago. The film serves as a continuation of the Ultraman Trigger series and picks up two years after the final battle for the Eternity Core had taken place. Immediately we are thrown into the action, which was both disorienting and exhilarating at the same time. Within the first ten minutes we get intense Kaiju combat flashbacks, we witness a haunting interaction between Yuna Shizuma and Kengo Manaka in which he begs her for help from the liminal space, we receive a cryptic message from the cult of Rylar, and we are beckoned to harvest the energy of the sun in order to save Kengo from irreversible damage. Talk about mile-a-minute plot beats! Although it was a lot of information to absorb at once, it wasn’t hard to pick up on the context and move right alongside the team. The combination of the GUTS crewmates’ camaraderie, electric energy, and unwavering passion for protecting humanity made me feel welcome and eager to learn the lore without any prior knowledge of the Ultraman Trigger series. Yeah, sorry guys, I haven’t gotten to it yet! Why go straight to the movie without taking in the show, you ask? Well, I love the Ultraman Connection Live events and watch all of those. (I’m big into the new UCL story canon.) Doing it last week meant seeing Episode Z and the team here at UC wondered what I thought coming in cold! This was also in part due to the clarity of the existing rules of science within the Ultraman universe. In order to prevent the light of Ultraman Trigger’s from fading out and fusing with the Eternity Core, GUTS was asked to harness the Ultra-Ancient Sparklence relic, gather and amplify the light of the sun, channel that light into the core to charge Trigger’s powers and enable him to fight once again. Not only is this ritual beautiful conceptually, but it is enriched even further by the requirement that it be conducted by all the GUTS members together (even if it led to some negative consequences!). Gathering at the altar gave the teammates a platform to manifest their love for Kengo (AKA Ultraman Trigger) in synchronicity. This helped me appreciate Kengo before even formally meeting his character simply because his teammates' concern for him was a testament to what a valuable person he must be. This setup also made space for other characters' stories to unfold before the main plot even took form. I appreciated this especially in the case of Yuna whom I was instantly drawn to. In only a few minutes of screen time it was very clear that Yuna is an empathetic person, entirely fit to wield the power of her ancestor, Priestess Yuzare. At the same time, that empathy can cause powers to become a burden as she is constantly worried for Kengo’s fate, and the expectations set upon her. Her internal struggle with her abilities is subtle but prevalent enough to make her character complex and interesting. The Ultraman franchise in its entirety seems to do a very good job at shining a light on the dimensions of their female characters which is extremely refreshing. Yuna, however, is not the only character who was faced with power related complexities. Once Kengo is revived and his ability to turn into Trigger is compromised, he admits in his conversation with new GUTS commander, Ryuichi Tokioka, that being the incarnation of light comes with an inherent darkness as well. He identifies that this is what makes him human because the coexistence of lightness and darkness is what the human condition is ultimately composed of. Tokioka responds to this by posing the jarringly existential question, if he can no longer tap into the lightness in totality and transform into Ultraman then who is he really? How will he survive? I think it’s really important for these ideas to be addressed considering they seem to have been underlying themes throughout the Ultraman story world. Balancing the power we hold as individuals with the power we can harness as a collective, ensuring that we know who we are despite our special abilities and circumstances in order to maintain a strong moral base. It doesn’t stop there, however, these principles are continuously explored in the film with the introduction of Evil Trigger and the space parasite Celebro. Evil Trigger’s goal is to gain power through causing mayhem and Celebro infects beings on various planets, “sowing fear that leads to arms races and self-destruction.” These antagonists are extremely topical and are in line with current events on many levels. In this context I think we can all relate to Kengo and resonate with his feelings of helplessness. He lacks his Ultra powers when he needs them most. In a way, we are all looking for our scattered Hyper Keys in these times of uncertainty. In the state he found himself in, Kengo could not restore peace on his own. But with the help of his team (including Dark Trigger and Ultraman Z, who has piqued my interest—and whose entire series just landed on Ultraman Connection for free) and the persistence true optimism, Kengo is able to pursue a positive outcome through the power of unity. We can all learn something from that. As Mr. Mitsukuni said best, “Anyone can become the light but perhaps they cannot shine on their own. That which connects people, that’s the light.” Evangelia Artemis March 2022 Evangelia is now a member of the Iceberg Theory team, producers of Ultraman Connection. She is a New York-based writer who also draws underground comics, loves anime, and is working on her first novel.