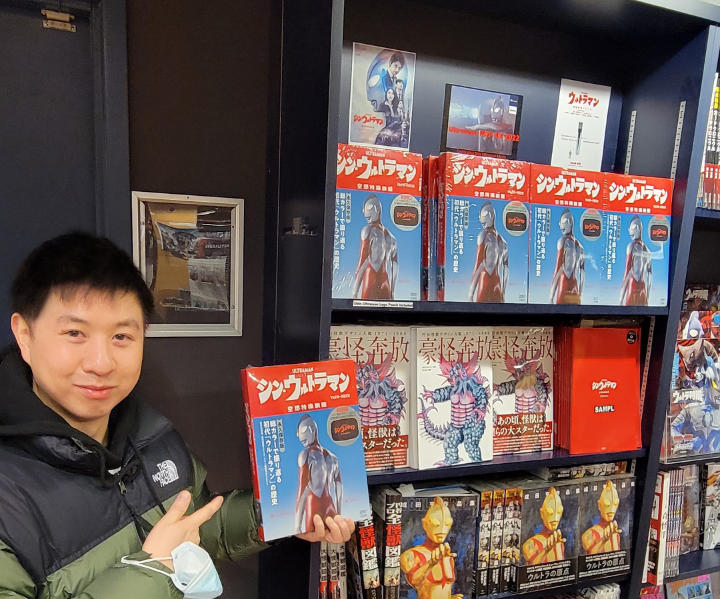 Hey Ultraman Fans! I got back to the Big Apple just a day before Anime Expo 2022 began, just in time for the holiday shopping season. I went to explore the lively city and stumbled upon a few shops across Manhattan with some cool Ultraman merchandise and wanted to tip you off to what I found.

First up was Kinokuniya New York, a sprawling Japanese bookstore located near Bryant Park, on 1073 6th Avenue. To my surprise, an Ultraman Popup store can be found at the underground level! How cool is that!? Japanese Ultraman merch in the United States! Where was all of this when I was a kid?

This book on Shin Ultraman covers the all the details on the film including the Ultra Q kaiju seen during the opening scenes of the movie, storyboards, and behind the scenes visual effects breakdowns. The artist within thrilled to how all these different elements were assembled for the final composite. 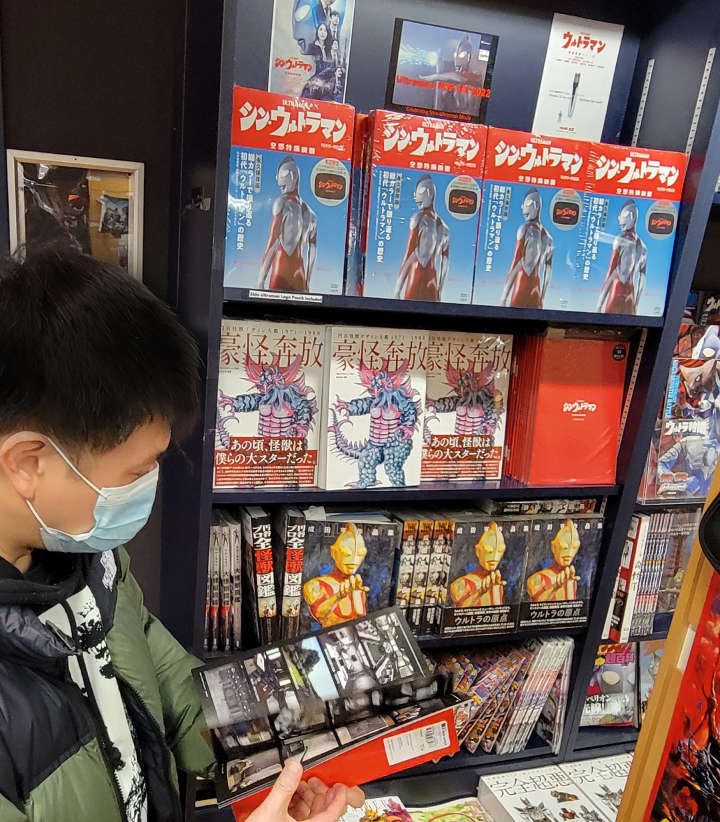 Moving to the next aisle, several more Ultraman books can be found featuring Shin Ultraman, Ultra Kaiju artwork, and several mooks (aka high-quality photo books), magazines, and much more! Seeing a bunch of my favorites Tiga, Z, and Zero together is just so cool! Look at that, even Ultraman Great (from Ultraman Towards the Future) and Powered (from Ultraman: The Ultimate Hero) had their mooks on the center shelf! 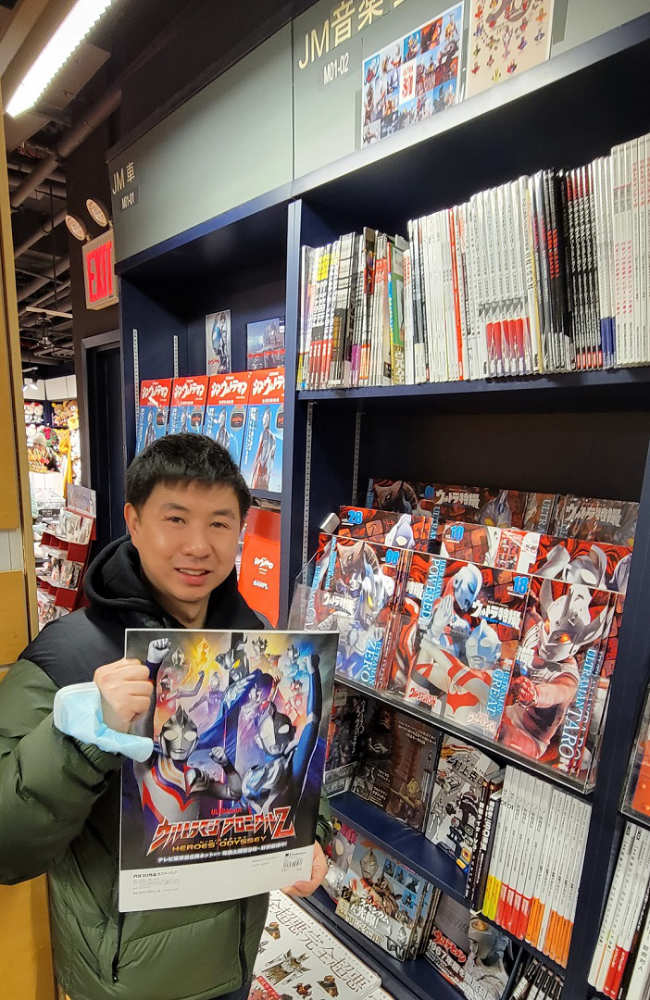 But that’s not all, up on the second floor in a small but terrific toy section, the S.H. Figuarts Ultraman Suit Taro can be found! If you missed out at New York Comic Con, are in the New York area, and don’t want to pay or wait for shipping, it would be a great option to pick up this cool detailed and highly articulated figure! 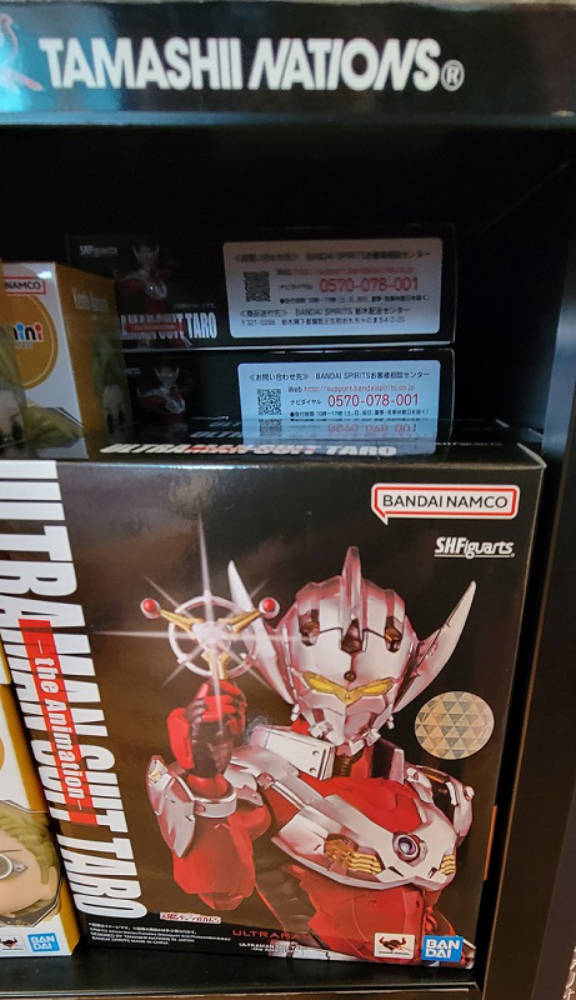 Next my New York City adventure took me to Book Off on 49 West 45th Street! Here more vintage Ultraman and Kaiju figures can be found! I’ve been a fan of Bandai since discovering them in the mid-90s and it’s so neat to see them in the wild and in person! 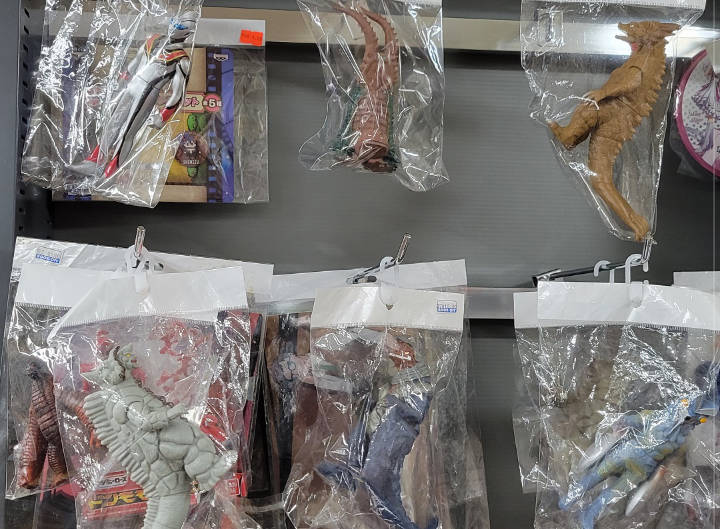 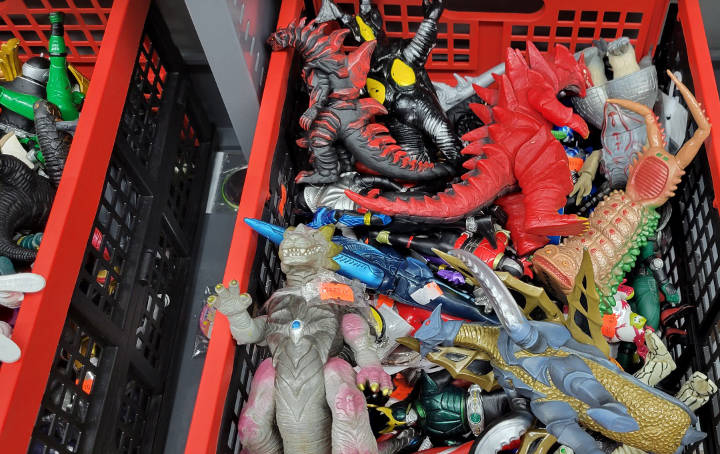 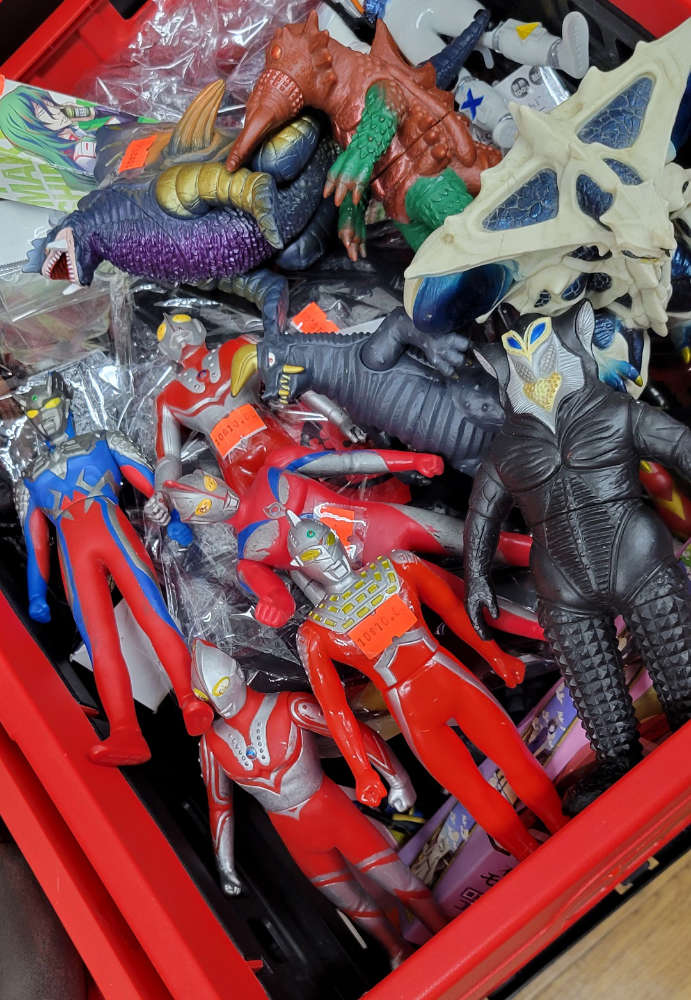 Soft vinyl figures are classic toys for all ages and are great as collectibles, desk mates, gifts—maybe some hidden gems can be found in these bins! For those who are into more cutting-edge collectibles, several S.H. Figuarts Ultraman figures including Ultraman Ginga, Ultraman Trigger, and Ultraman Suit Ver 7 along with the Banpresto Ichiban Kuji Ultraman Taro were on display. 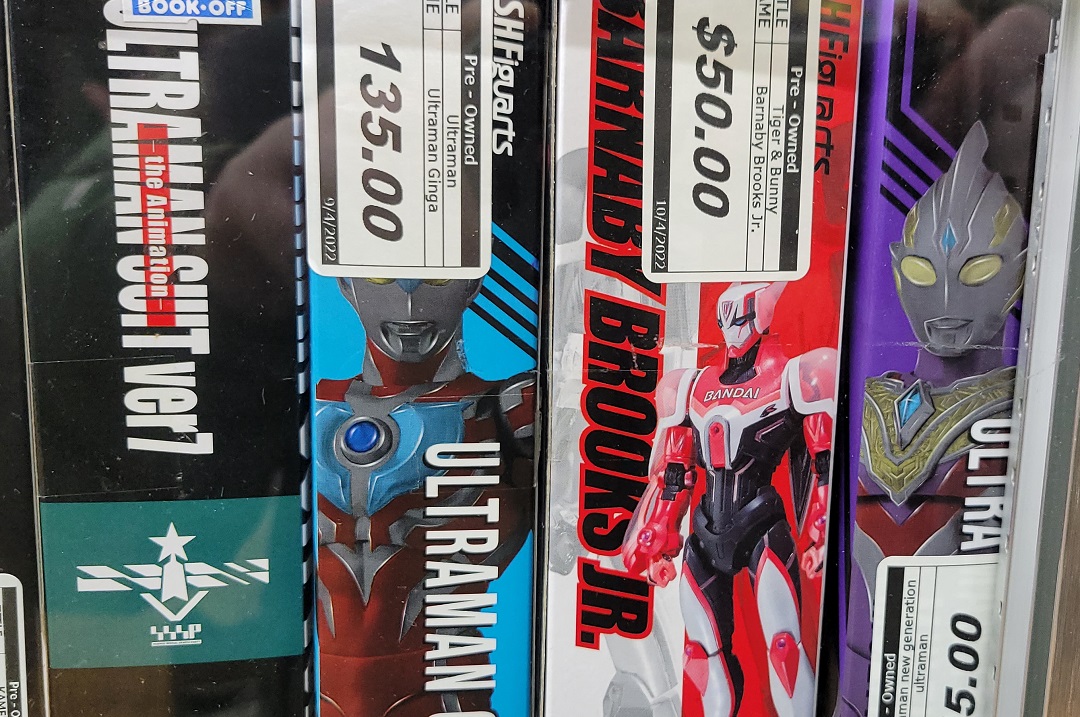 Heading upstairs, you can find the whole Viz Media ULTRAMAN manga collection available including the latest volume# 17 featuring Ultraman Suit Marie! This would be a perfect time to catch up on this incredible series.

I then headed over to Midtown Comics in Times Square on 200 West 40th Street. Climbing the steep stairway to the second floor, more Ultraman merch awaits! I first found the Hero’s Brave Statue Figures by Banpresto. I love this newer 6-inch line as they are affordable and are quite detailed for the price point. They come faithfully pre-posed with a minor two-step assembly.

On the right is the Ultraman Trigger Statue Soft Vinyl Style Hero's Ultraman Trigger Multi Type 26 cm (10-inch) by Banpresto and the SofVics Ichibansho Ultraman Taiga 30cm (12-inch) figures for those who like larger figures. 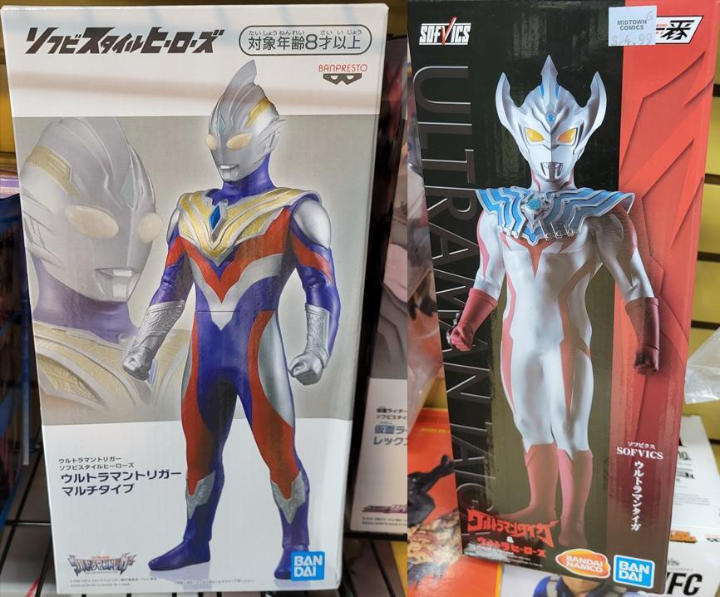 Turning around within a 360 display were the Figuarts Mini Ultraman Z Original and Ultraman Trigger. These are adorable! I first saw these on the Tamashii Nations X Ultraman Connection YouTube special back in September. Neat collectibles for those who like the chibi style. They don’t take up too much space and make perfect gifts as Ultra stocking stuffers. 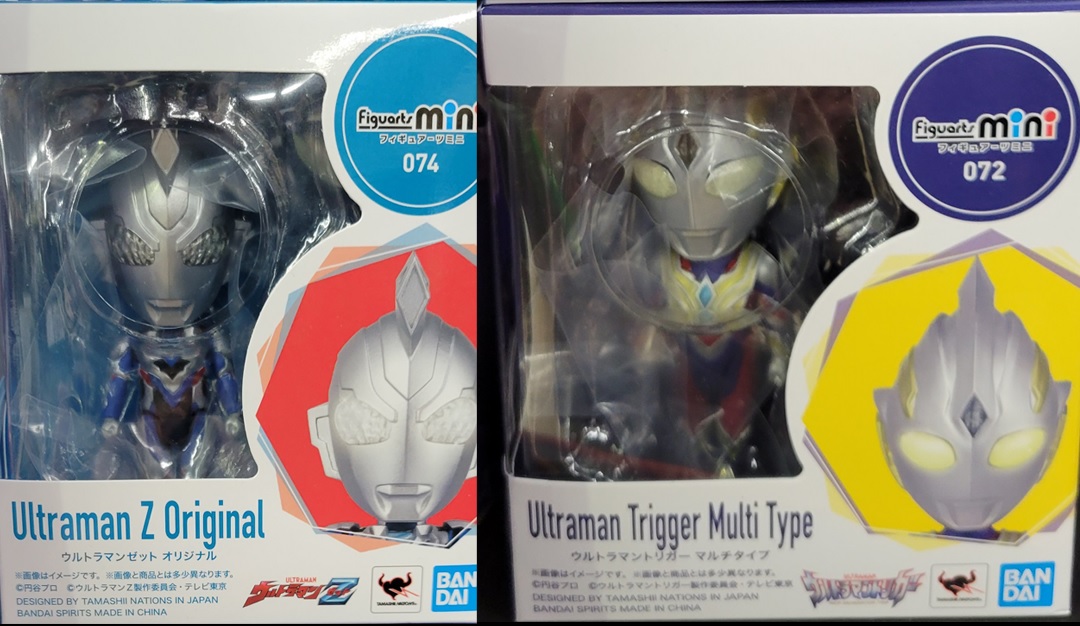 A very cool Threezero X Ryu Oyama Ultraman Kaiser Belial can be found in the special glass display with other high end collectibles. This figure comes with several accessories allowing you to display him in his regular form with the Gigabattlizer or as Kaiser Belial with extended claws and a cape made out of fabric. I’ve been eyeing this one for some time. Should I bite the bullet? 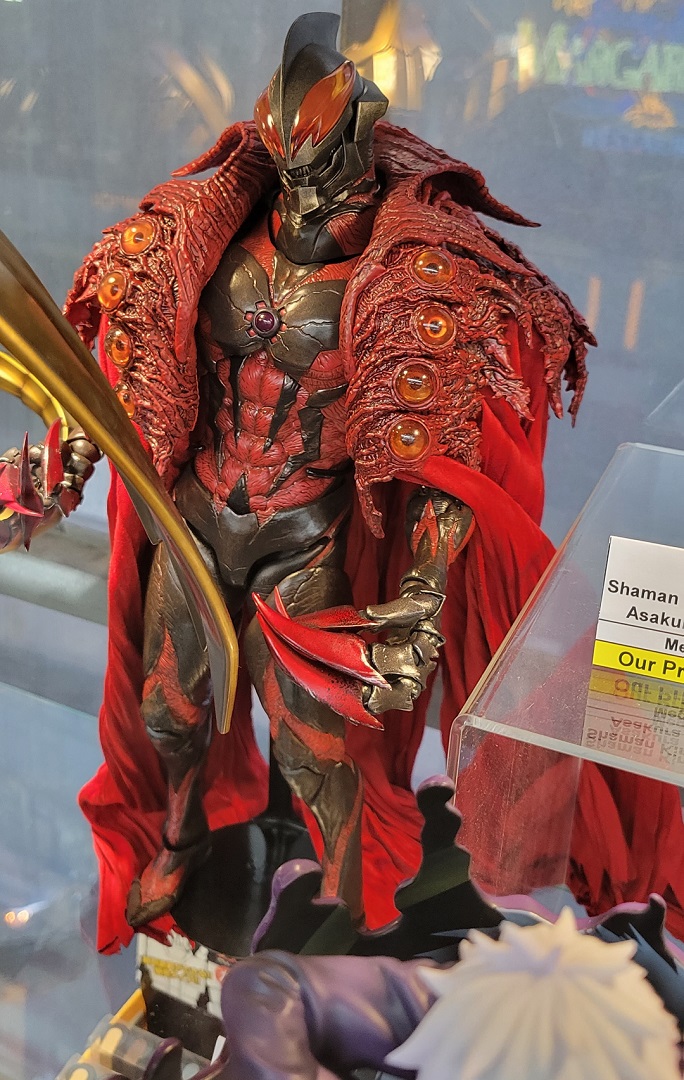 If you want more interaction, Figure Rise model kits by Bandai Spirits could also be found there. The box art for Ultraman Suit Taro is breathtaking! 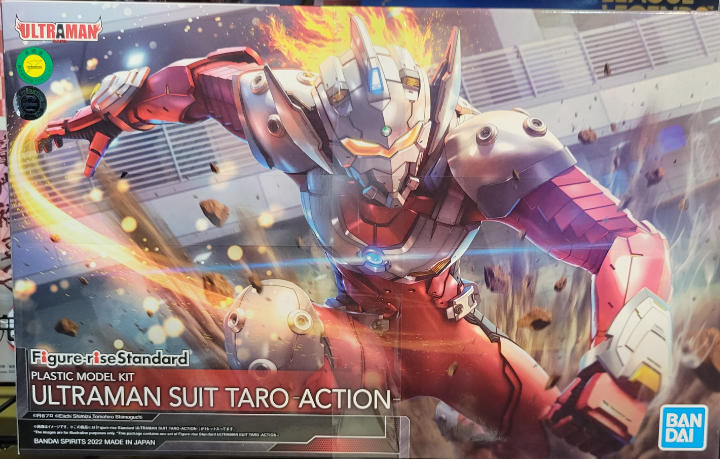 Wait there’s more! Check out this collaboration with Ultraman and Chinese mythology! Bandai Spirits presents the Armour of Legends model kits! Looks like this is Wave 2 with Ultraman Titas as Guan Yu, Ultraman Ginga as Nezha, Ultraman Rosso as Cao Cao, Ultraman Blu as Xiahou Dun and Ultraman Dyna as Ma Chao. When I first saw Wave 1 including Ultraman Zero as Monkey King, Ultraman Tiga as Zhao Yun, Ultraman Fuma as Zhang Fei, and Ultraman Beial as Lu Bu, my mind was blown away!

As an ABC (American Born Chinese), I learned of these legends in Chinese mythology through Manhua (Chinese comics), TV dramas / movies (i.e., Romance of the Three Kingdoms, Journey to the West), modern-day 3D animations (i.e., Nezha 2019 on Netflix), and popular video games such as Dynasty Warriors. These Ultra Heroes in colorful armors would certainly serve as unique pieces for any collection! It might be neat to see this series appear in some sort of comic book format, animated series, or even live action. 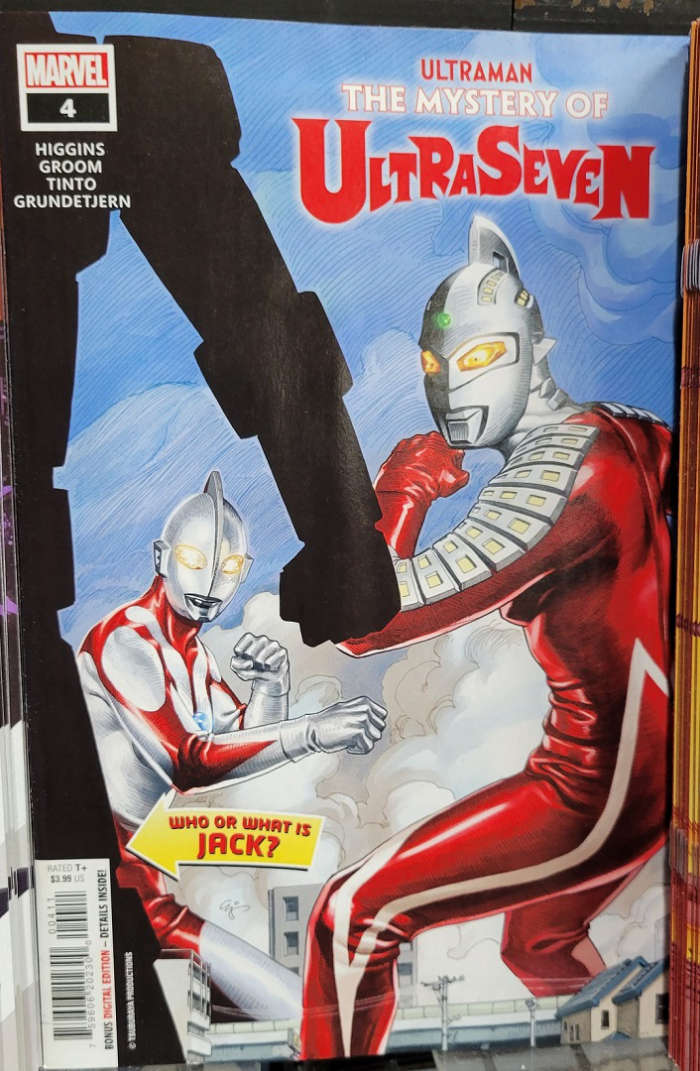 Returning downstairs at Midtown Comics right before the register, I spot Ultraman: The Mystery of Ultraseven issue# 4 on the comics shelves! Perfect timing to pick up the latest issue of this latest Marvel Comics miniseries. I love that the issue #3 ended with introducing the Monster Attack Team and the cover on this issue has a silhouette with a subtitle “Who or what is Jack?” Can’t wait to check out Marvel’s take on Ultraman Jack! 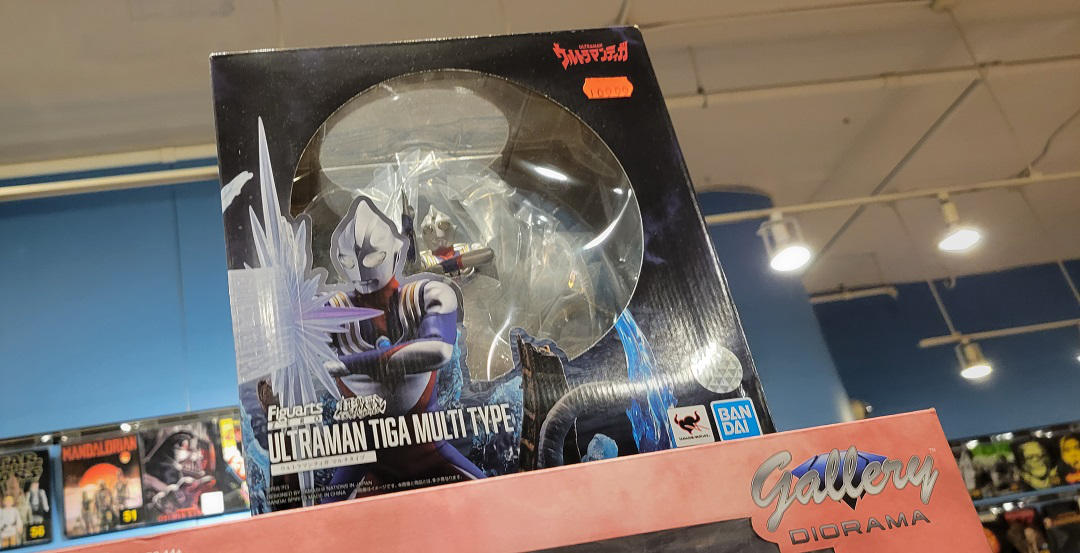 Continuing downtown toward Union Square, I stumbled upon this neat pop culture store called Forbidden Planet located on 832 Broadway. There I found one of the coolest Ultraman pieces by Tamashii Nations, the Figuarts Zero Ultraman Tiga Multi Type diorama statue, available for sale at the very top of the display case. I had ordered this from Japan but seeing it in person at a local comic store absolutely amazes me!

Going to the back comic book aisles, I found the VIZ Media ULTRAMAN manga there as well. The art by Eiichi Shimizu and Tomohiro Shimoguchi on these covers are just so wonderful! I was very fortunate to meet both artists from New York Comic Con 2022 and got to see their talent firsthand during the VIZ Media panel during a live sketch session.

Sadly, I ran out of time and I didn’t get a chance to see Toy Tokyo on 91 2nd Avenue, which is known for having an array of Japanese collectibles. On my way back, I stopped by Best Buy to warm up from the New York cold. As I looked around the Blu-ray shelves, I found the Mill Creek release of Superior 8 Ultra Brothers movie!

This was the most commercially successful Ultraman movie in the franchise history until it was surpassed by the 2022 film, Shin Ultraman. Definitely pick up this awesome movie as it features the original cast from the corresponding Ultraman shows including the super fan favorite Hiroshi Nagano from the group V6 as Daigo (Ultraman Tiga), Takeshi Tsuruno as Asuka (Ultraman Dyna), Takeshi Yoshioka as Gamu, (Ultraman Gaia), Susumu Kurobe as Shin Hayata (Ultraman), Koji Moritsugu as Dan Moroboshi (Ultraseven), Jiro Dan as Hideki Go (Ultraman Jack), Keiji Takamine as Seiji Hokuto (Ultraman Ace), and Shunji Igarashi as Mirai Hibino (Ultraman Mebius) united in an alternate universe to battle invading aliens! The cover art alone is really neat! 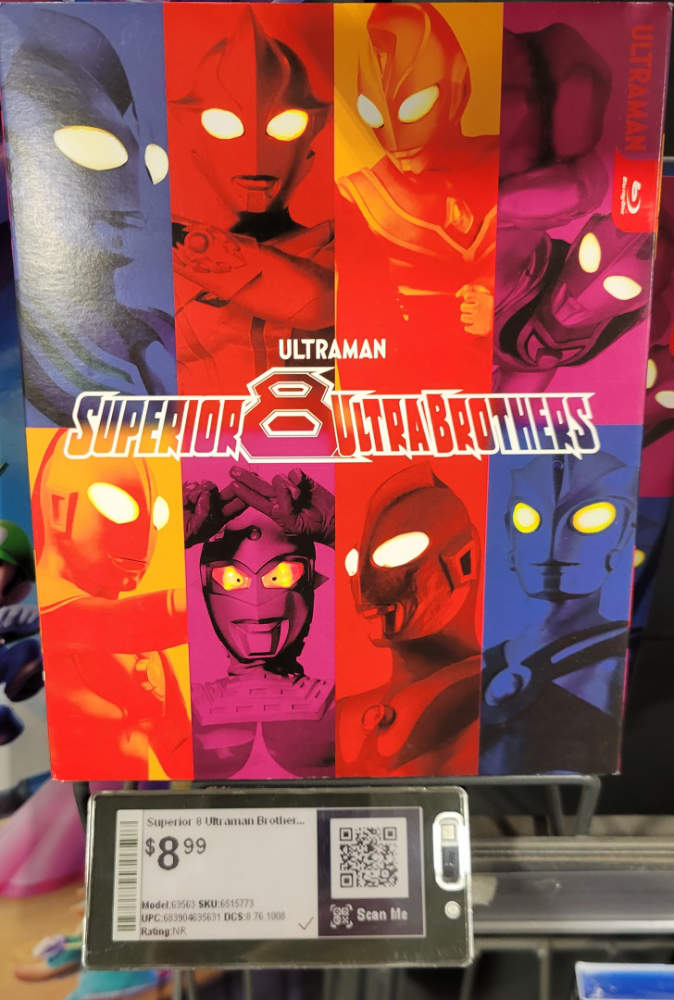 Time to say farewell to New York City. It certainly is an incredible time to be a fan of Ultraman and all things tokusatsu! Cheers and Happy Holidays from the Ultraman Connection Team! 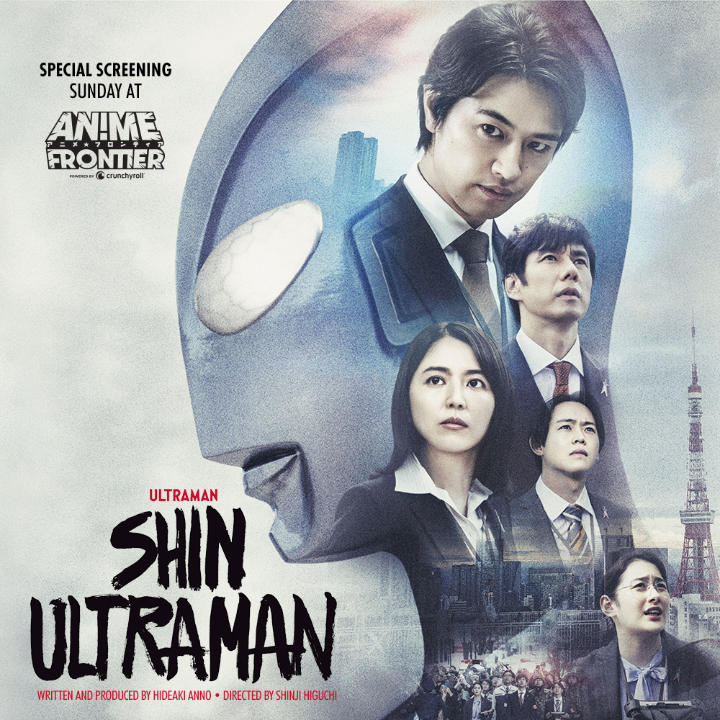 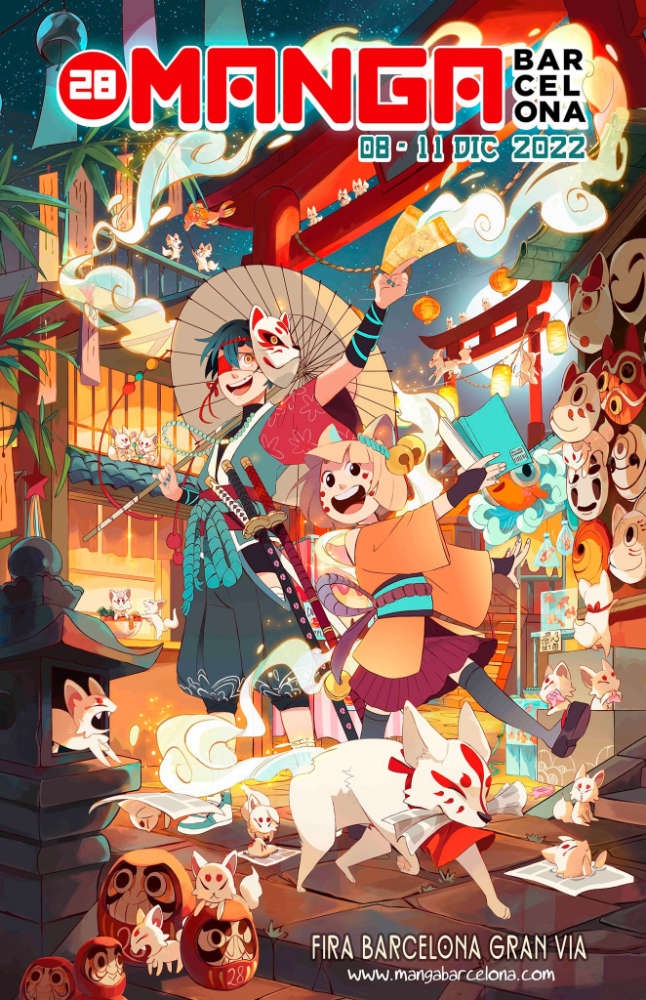 SHIN ULTRAMAN is Coming to Manga Barcelona 28 on December 10th . . .