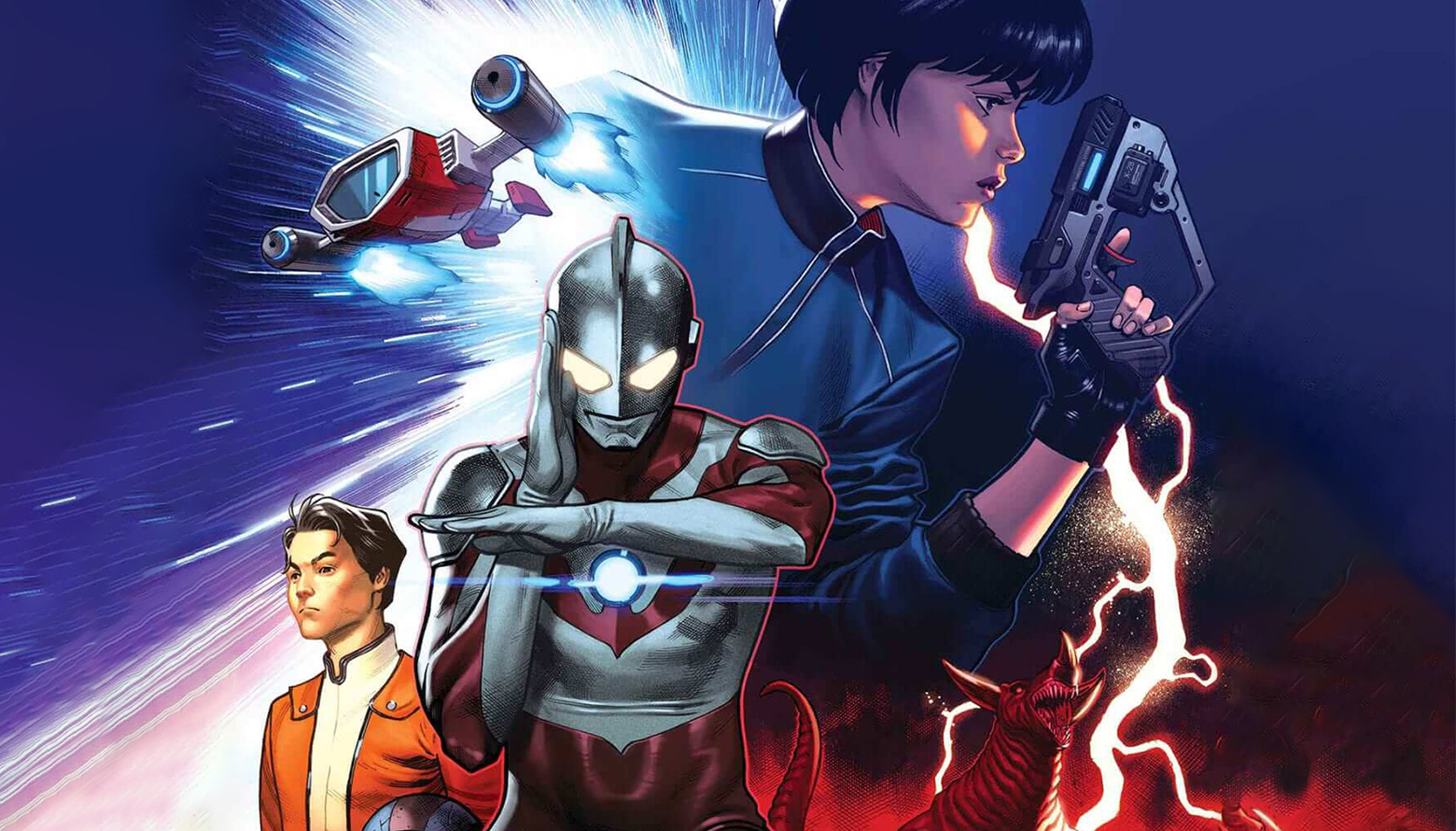 The Rise of Ultraman issue #2 from Marvel Comics arrives at comic shops everywhere Wednesday, October 7! For this issue, fans will have five incredible covers to choose from, ranging from standard releases to limited editions. Let’s take a look at them all!

The standard cover is a beautiful montage featuring Ultraman in his Spacium Beam pose, Kiki Fuji wielding a United Science Patrol K-Ray gun, and the return of classic orange Science Patrol uniform. Also featured is a truly vicious rendition of classic Ultraman foe, the Ancient Monster Gomora. The cover is drawn by comics artist and product designer Jorge Molina, the main artist for the 2018 Spider-Man crossover event Spider-Geddon and the all-female Avengers comic A-Force (a team referenced during the final battle of Avengers: Endgame). Molina is proof that Marvel is pulling no punches on the Ultraman books. His Marvel credits also include various issues of the X-Men titles and covers for series such as Avengers Assemble and New Mutants. Molina will return to The Rise of Ultraman with a cover for issue #3.

The first variant cover is a digital painting of Ultraman in battle with one of his most popular foes, the Space Ninja Baltan. The artwork was created by Stanley Lau, a Hong Kong-based illustrator and concept artist who goes by the professional name “Artgerm.” Lau is the co-founder and creative director of the digital art studio Imaginary Friends Studios, which has produced digital artwork for Marvel, DC, Capcom and other clients. A lifelong fan of Ultraman, Artgerm recently tweeted his excitement over creating a variant cover for The Rise of Ultraman #2, stating, “Never would have imagined drawing something official for my favorite childhood hero.” Note that the Kaiju featured on these covers are not always the ones featured in that issue’s storyline.

Artgerm’s The Rise of Ultraman cover will also be available as a “virgin” variant; a textless version (save for the Marvel logo) allowing the artwork to be viewed cleanly without the series title and credits. This edition is a retailer incentive and rarest of the covers; stores will only receive one (1) virgin variant for every 100 copies ordered, making it the hardest to find of the issue #2 covers. But one look at that spectacular artwork proves it’s well worth the search!

Arthur Adams burst on the comics scene in 1985 with the Marvel mini-series Longshot and quickly became one of the most popular artists in the industry, acclaimed for his work on the X-Men and Spider-Man titles, Fantastic Four, Batman, Action Comics, Hulk and many other comics. Adams is well known for his love of kaiju and tokusatsu, having co-written and illustrated the Godzilla Color Special producing numerous Godzilla comic book covers, and sneaking Godzilla and Ultraman monsters into his other works. His first official Ultraman artwork is this explosive variant cover featuring the Hero of Light and 19 classic creatures from the 1966 television series! Only 1 in every 25 copies will use this cover, so if you see it, don’t miss out! To find out more about this cover, check out out previous article.

The final variant cover is by Masayuki Goto, the second Japanese artist contributing to The Rise of Ultraman (following Yuji Kaida’s art for issue #1). Goto is certainly no stranger to Ultraman, having worked for Tsuburaya Productions as their lead character designer for new Ultra Heroes since the 2009 feature film Mega Monster Battle Ultra Galaxy: The Movie. His designs include the various forms for Ultraman Zero, all of the New Generation Ultra Heroes, including the new hero Ultraman Z, the Ultimate Force Zero team, and fan favorite villains like Ultraman Belial and Jugglus Juggler. He also redesigned Tsuburaya’s hero Gridman for the 2018 anime series SSSS.Gridman. Goto’s colorful cover illustration shows Ultraman firing his Spacium Beam directly at the viewer!

Share your thoughts about these covers or anything else about Marvel’s The Rise of Ultraman comics on Twitter with hashtag #TheRiseofUltraman or mention us @TsuburayaGlobal.

The Rise of Ultraman #2 goes on sale on October 7th, 2020, at comic shops everywhere. Make sure to pick it up, and keep your eyes glued to UltramanGalaxy.com for more news from Tsuburaya Productions and Marvel Entertainment!