MARVEL’S THE RISE OF ULTRAMAN:AN INTERVIEW WITH KYLE HIGGINS AND MAT GROOM (PART 1) 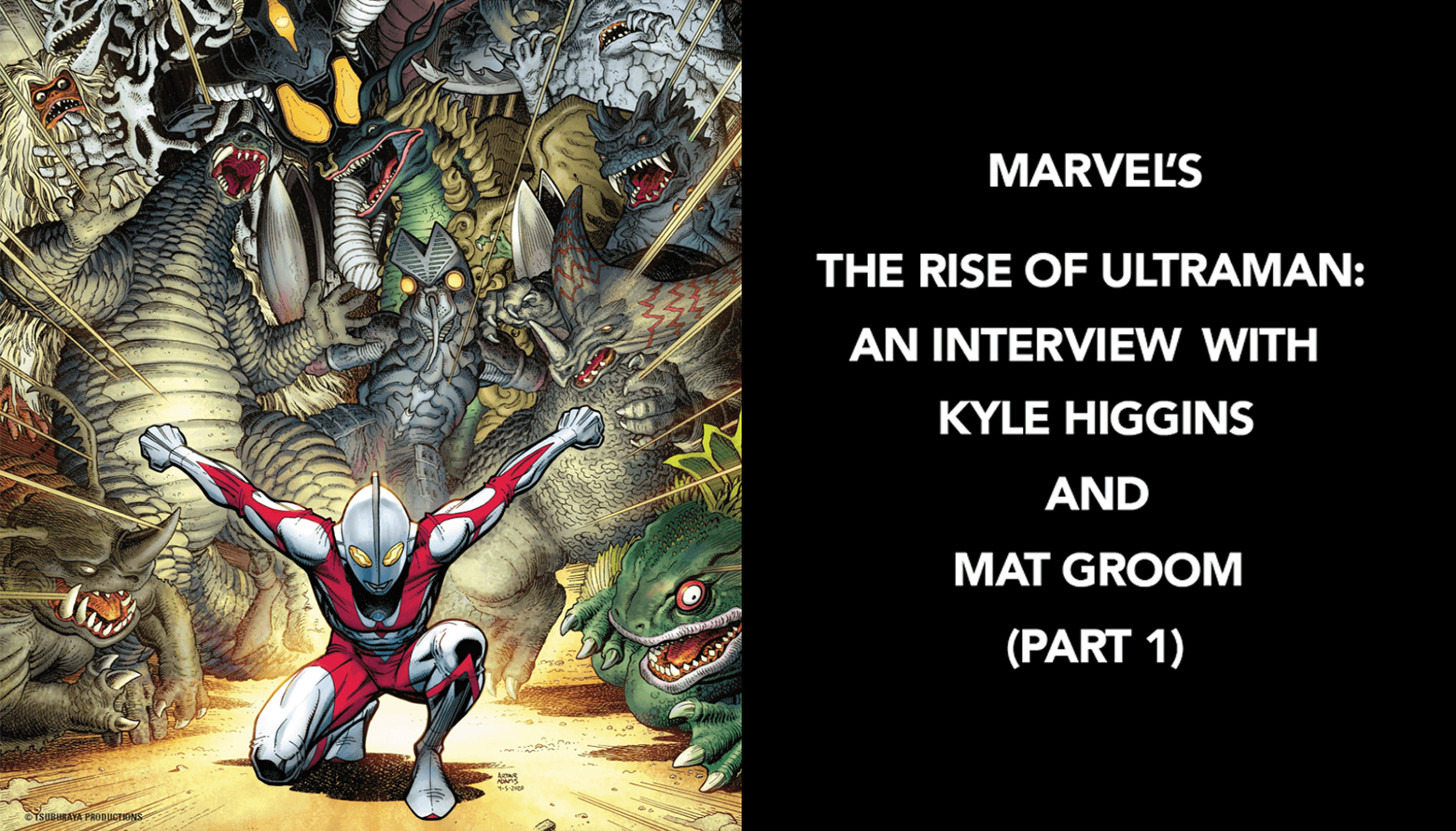 Hello Ultra-fans! We’re hoping that you had a spectacular Ultraman Day on July 10th!

We’re continuing the celebration of all things Ultraman by giving you an exclusive interview regarding the upcoming Marvel comic book, The Rise of Ultraman! You can find out more about that comic book across our site, but if you’re just tuning in, this is the perfect place to begin, because we’re here with two people who know this story better than anybody: writers Kyle Higgins and Mat Groom!

Ultraman Galaxy: When did you first discover Ultraman?

Mat Groom: I grew up in a time, in Australia, where it was kind of an Ultraman desert. There wasn’t a lot of media available, but we were surrounded by everything that was influenced by Ultraman. So, while I wasn’t familiar with Ultraman growing up, when I finally encountered Ultraman it felt immediately familiar. It turns out I loved Ultraman all along without even knowing it.

Kyle Higgins: I have a similar kind of relationship in that we didn’t have Ultraman in America when I was growing up. But I was aware of the iconography. So, I feel the same way about recognizing the aspects of Ultraman that actually influenced other things that we are fluent with.

I found tokusatsu through Western adaptations. Power Rangers introduced me to the idea of Super Sentai, Masked Rider to Kamen Rider and VR Troopers to the 1980s metal heroes. I was aware the original material existed, but didn’t start getting into Sentai until I was writing Power Rangers.Mat turned me on to how hip the Sentai stuff is.

I was into Sentai and Kamen Rider before Ultraman. When I started watching the original show, I was surprised by how much it was a direct influence on everything that came after.

During C2E2 I met members of Starlight Runner and Tsuburaya and we had a conversation about miniature work. I have a background in directing, so when I found the ‘60s show and started watching the Mill Creek Blu-rays, I saw the complexity of the shoot. Mat pointed out that it was only a few years earlier that they started moving the camera in TV. The idea of camera movement and selling scale on a TV budget is incredibly ambitious.

I have a ton of respect for the material and for the craft that went into it.

And that’s not even counting Ultra Q. Conceptually, like Ultraman it is the next logical iteration from Ultra Q. To see how Ultra Q influenced Ultraman, and then how Ultraman became its own thing; it all still loops back. Ultra Q was incredibly revolutionary, and very much a precursor to things like The X-Files.

UG: What themes in Ultraman are you carrying over into the comic?

Mat: The scale is fascinating. So is the scope of the danger and the heroism that is required to combat it.

If you look at the Kaiju, these massive, terrifying creatures that represent the darkness in our hearts…it makes sense that we had to reckon first with ourselves, the terror of what we could do to each other and create in our own world. But the next step is one of radical optimism and bravery, and the ability for humanity to tackle those problems. There is something really optimistic about thinking that we can stand up to the darkest of things.

What we’re trying to do is modernize that idea, not in the sense that it needed to be “fresher,” but the darkness in the world is different than it was then. Perhaps more pervasive, more systemic. It may be different, but it doesn’t mean there’s less of a need to find the goodness and bravery to rise to the occasion. In some ways, there’s more of a need.

It’s been an exercise in taking that powerful idea and expressing that in a new way. But at the heart, it’s the same…just a different expression for a different time.

Kyle: I respond to the component that the Ultras are not here to be our saviors. They are here to help us become better, ourselves.

In some ways, I think it’s that core dynamic that makes Ultraman at Marvel such a nice fit. Historically, when you look at DC’s superheroes, at least the early ones are a bit inaccessible. They are gods that have come to us, that we look up to and who we want to solve our problems. They are not who we could be. They are better than we ever could be. Whereas the Marvel heroes are built on flaws that are identifiable and relatable. If they succeed in their mission, they are the best versions of ourselves.

It’s that aspect that we latched onto as we were looking to revisit the original show and update/remix/modernize aspects of it as we bring it to a new audience and medium.This isn’t the first time Ultraman has been in comic books [in many years], but the scope and ambitiousness of the publishing model is a big new platform.

Mat: If you combined these two ideas that Kyle touched on, then the potential is there to take the Marvel model and apply it, not just to Shin Hayata, but to all of us.

Once we made that connection, we found the foundation that excited us. There’s already massive potential in Ultraman, but this is how we can do it in a way that may make it something that will excite existing fans. They’ll see elements that are recognizable but remixed in new ways. And new fans will be able to jump in on the start of this new heroic journey.

Kyle: We have built this journey out to be very grand. Our outline was more of a mission statement and an overall game plan; “Here’s how we’re looking to recontextualize the central metaphor…here are our ideas for the first mini-series…here’s where we can take things going forward.”

Kyle: There’s a reason why we wrote everything in issue #1; you’re going to go, “How could that be part of it?” I promise you, it’s all part of the larger whole.

Mat: We’re standing on the shoulders of Ultraman-sized giants. There are decades of fantastic, intricate myth, and having the ability to take those elements and find new ways of using them…there’s so much to work with. We definitely recognize the privilege.

Kyle and Mat were gracious enough to share a good chunk of their time with us…so much so that we have a second part to this interview! Check back into UltramanGalaxy.com later this week when we post it, and make sure to grab The Rise of Ultraman #1, arriving at your local comic book store or online this September! See you soon!