REVEALING THE NEW FORMS OF ULTRAMAN Z AND GEED!

The theme song, “GOSHOWA KUDASAI WARE NO NA WO! (Chant My Name!),” will be sung by anime song super unit JAM Project’s Masaaki Endoh, while the ending song, “Connect the Truth,” will be by Nami Tamaki. In the newly released video, you can see three new forms of Ultraman Z (pronounced Ultraman Zett) activated by the protagonist’s new transformation items, the Z Riser and Ultra Medal.

As shown in the video, popular voice actor Tasuku Hatanaka will be voicing Ultraman Z. Additionally, the protagonist of Ultraman Geed (2017), Riku Asakura (played by Tatsuomi Hamada), will make a guest appearance. Finally, the main director for the series will be Kiyotaka Taguchi, who also directed Ultraman X and Ultraman Orb. Please look forward to our latest show, Ultraman Z!

A device given to Ultraman Z, originally developed in the Land of Light to deal with chaos on a galactic scale. By registering each user’s distinctive “Ultra Access Card” and scanning three inserted “Ultra Medals” that contain the power of previous Ultras to the Z Riser, Ultraman Z can be imbued with that power. Additionally, it can be used as a weapon after transforming. While transformed, the protagonist, Haruki Natsukawa (played by Kohshu Hirano), can switch to attack mode and activate three medals to perform a special signature attack.

A card that works as an authentication key to activate the transformation item “Ultra Z Riser.” A picture of the user is printed on the card. When Haruki uses his card, he can transform into one of Ultraman Z’s various forms. When Riku Asakura (played by Tatsuomi Hamada) uses his card, he becomes Ultraman Geed Galaxy Rising.

Developed in the Land of Light along with the Z Riser, each Ultra Medal contains the power of a previous Ultraman. Haruki carries them in the Z Holder on his hip.

Z transforms into Alpha Edge using Ultra Medals with the power of the inherited masters and disciples:

Seven, Leo, and Zero. This speedy form fights with Space Martial Arts inherited from his master and specializes in quick moves using karate.

“Burn in Scarlet Flames, the Power of Courage!”

Ultraman, Ace, and Taro. This powerful form has a dignified fighting style and specializes in courageous and impressive pro-wrestling type battles.

Tiga, Dyna, and Gaia. This psychic form fights with mystical powers. He is skilled at versatile beam attacks and fights more like a wizard.

Riku Asakura (played by Tatsuomi Hamada) transforms into Ultraman Geed, from in the 2017 TV series, and will make a guest appearance in Ultraman Z with a new look! Although Geed inherited genes from the evil Ultraman Belial, he’s an Ultraman who fights for justice in defiance of that destiny. Riku, entrusted with an Ultra Z Riser and medals for Ginga, X, and Orb, takes on a new form and flies to help Z on Earth.

The opening theme song for Ultraman Z, “GOSHOWA KUDASAI WARE NO NA WO! (Chant My Name!),” will be performed by Masaaki Endoh, a member of the anime song super unit JAM Project. This series focuses on the passionate battle story of two young heroes: our protagonist, Haruki Natukawa, a new pilot for the anti-monster robot force “STORAGE,” and Ultraman Z, a new hero and disciple of Ultraman Zero with a passionate heart.

The theme song “GOSHOWA KUDASAI WARE NO NA WO! (Chant My Name!)” is representative of the series and “the (self-proclaimed) most passionate theme song in the history of Ultraman!” said Masaaki Endoh.

The ending song, “Connect the Truth,” will be sung by Nami Tamaki.

“Connect the Truth” expresses another theme of Ultraman Z: “What are fighting, ethical power, and true kindness all about? I want to bring that truth (the answer) to all of the important people struggling, working, and forging new paths together, and to the newly spun future. It’s a song with those kinds of intentions,” said Nami Tamaki.

When I was small, I remember writing my dream at Tanabata. “I want to become Ultraman,” I wrote. Ultraman has been my hero since I was small. How he fights, how he rises up again and again, gave me courage, and I’d shout myself hoarse cheering for him in front of the TV. The fact that I can be involved with Ultraman, and the fact that I can be Ultraman Z’s voice, still feels like a dream even now. It’s an incredible honor. This Ultraman is still young and inexperienced, but his passion is stronger than anybody. I think that with such life-sized feelings, he’ll continue to grow together with Haruki! Full speed ahead! Thank you!!

When I heard that I’d be appearing in Ultraman Z, I couldn’t believe that I would get to participate in the Ultraman series for four years in a row. I am honestly very proud to have this opportunity! And since this time Riku transforms with the Ultra Z Riser instead of Geed Riser just like Haruki does, Geed gets to have a new form, including a new transformation sequence! I hope viewers will look forward to seeing Z, the disciple of Zero, and how my character Riku Asakura and Geed will be involved in Z’s world! Sitting around doing nothing won’t get us anywhere!

When I was a kid, I used to sit in front of the TV with a racing heart and get sucked into Ultraman. The standard game I’d play at the neighborhood park with my friends was Ultraman. Even now I remember the lyrics and can sing the Ultraman song. I have a feeling I learned to not give up, to believe, to have a kind heart, to value life – all of it from Ultraman. It’s really an honor to make a song for the Ultraman series, given that I grew up with Ultraman; it feels like fate. I think its time to repay the Ultraman who raised me. I want to passionately cheer on Ultraman Z through song and pump up all the kids like me who sit in front of the TV with racing hearts!

It’s an incredible honor to be involved in creating the ending song of this time’s historical Ultraman series Ultraman Z. I’d love for fans to listen to the song at the end of the episode while looking forward to next week. We’ve created a powerful and danceable song, so please look forward to it!!

This time, on top of being the main director, I’m also in charge of the series composition. I’ve been involved in the project since the early development stage and sprinkled in all of my thoughts such as “I think we need this,” and “Wouldn’t this be fun?” from the ground up. While composing the series, I planned the ending at the beginning and worked backwards to put in a lot of storytelling tricks leading up to the climax. Please look forward to them! Nowadays, the world is filled with all kinds of hardships, so we staff and cast are pouring our heart and soul into this work to create something that can cheer people up, with a “bright and fun Ultraman” as the number one theme. Please chant with me, Ultraman Z! 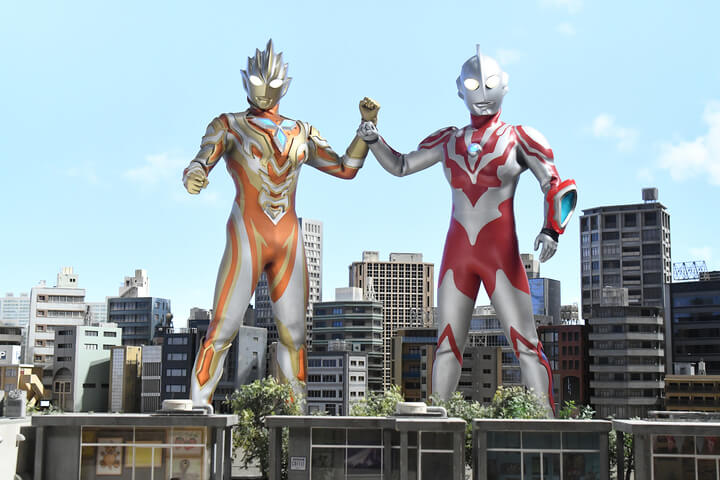