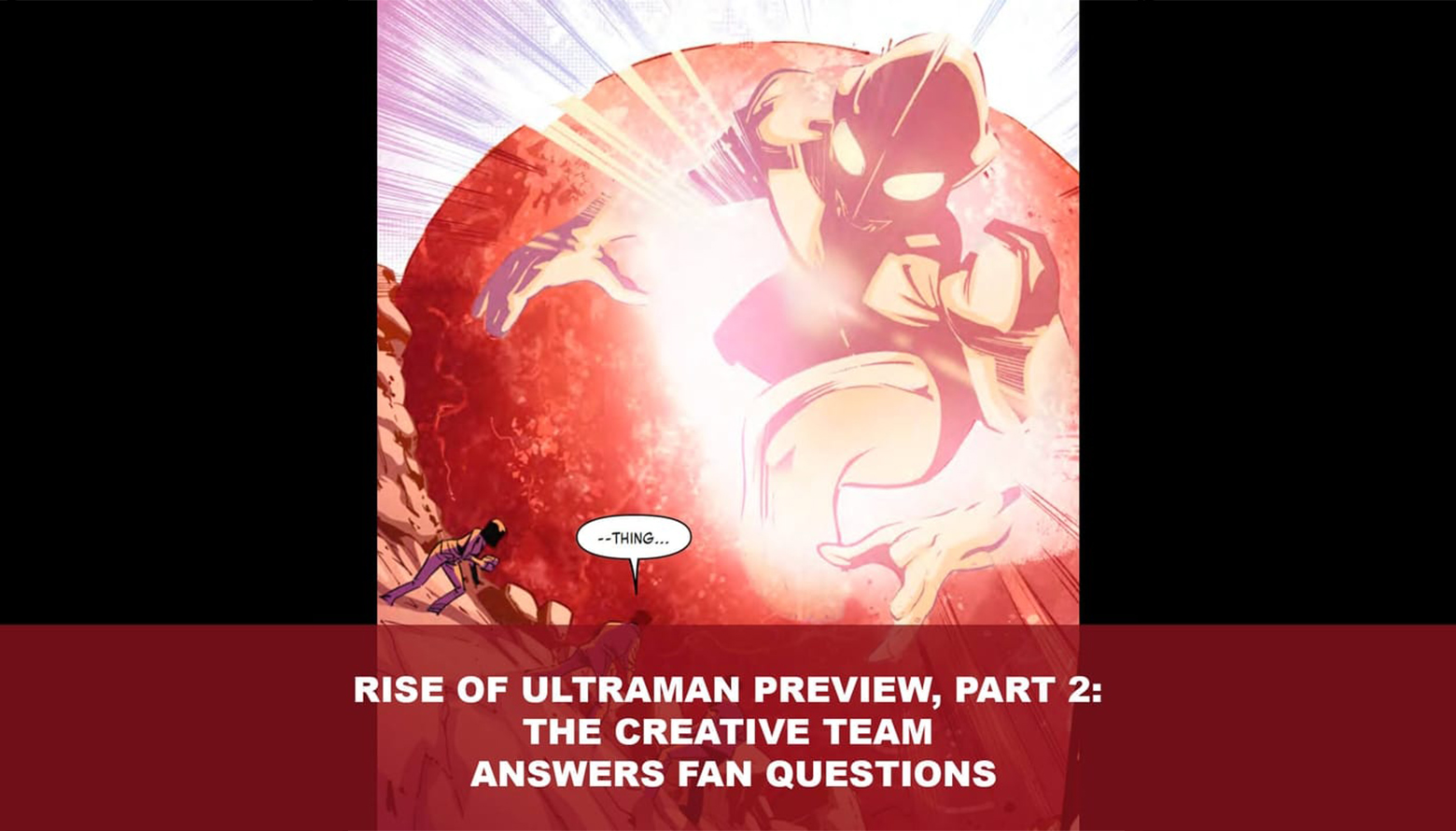 The debut of Marvel’s The Rise of Ultraman is just around the corner on September 9! We’re back today with co-writers Kyle Higgins and Mat Groom and artist Francesco Manna, in the second part of an interview, with questions from fans, about their new comic book miniseries!

Q: How involved was Tsuburaya in regards to crafting the story for Marvel’s series? Were there any restrictions or were you free to play in the universe of Ultraman?

Mat: The people at Tsuburaya have been very involved. They care so deeply about Ultraman. I think the thing I was really struck by, when we started this project, was that above and before anything else, they were so passionate about ensuring everyone involved understood the heart of Ultraman. What Ultraman means, and why Ultraman matters.

I think most people when they think of license holders for a brand would think of someone making sure the logo was the right size or whatever, but that’s not Tsuburaya at all, at least in our experience. And no, I don’t think there have been any ‘hard’ restrictions, or at least any that we’ve come across yet. Really, everything is just a conversation about whether what we’re doing serves the ideals of Ultraman. Which has been fantastic, because it has given us the freedom to reimagine and reinterpret, but also the confidence to know that if we stray too far from the core ideas that are important, Tsuburaya will guide us back in.

Because this is not the universe of the original show, and we’re taking a lot of familiar elements in totally new directions, it’s never about technicalities, about ‘actually this happened between this date and that date’ or ‘this should be a certain color’—it’s always about ‘does this mean what an Ultraman story should mean?’

Q: How quickly will you expand on the Ultra universe, which has a wide range of modern designs and stories to explore, as opposed to focusing on “reinventing the original” with a nostalgic approach?

Mat: It seems from your question you might be expecting or hoping that characters and stories from the Second Generation or Third Generation will appear, and we’re not really going there. But we’ll be expanding on the original universe right away. Immediately. Right from issue #1, there will be totally new characters and story elements. We’re not interested in treading old ground. And we’re very interested in contributing to the greater Ultraman lore, contributing fresh elements to it.

Kyle: Oh man, that’s a tough question! So far, I have to say that the more I learn about Ultraman Ace and the threats that the series explored, the more excited I get.

Q: We have seen hints about Dan Moroboshi and Ultraseven in Rise #1. What is Ultraseven’s role going to be in the series?

Mat: Rather than answer the question, could I perhaps (with my inside knowledge) suggest a better question: “What role will Ultraseven’s absence play in The Rise of Ultraman?”

Q: How is Francesco leveraging the medium of comic books? What will the comics incarnation offer that we haven’t yet seen, or possibly couldn’t ever see, from the live-action versions? Did he look at any of the other comics, either Japanese or American, for inspiration during the development?

Francesco: Comics have a big advantage over live-action—the ‘special effects’ have no cost.

Because I’ve been given the creative freedom to build a whole new world, I tried to push to spectacular levels the visual choices in every detail—always wanting to show something that we haven’t seen before in the different versions of Ultraman, while still always respecting the classic traditions of this world.

As I previously mentioned (in the last article), I took whatever techniques I thought most useful from the comics of different cultures. For example, French artists are great at using different angles and making the most of the space on the page, and Japanese artists helped me learn so much about creating dynamic sequences with dynamic moments—they have truly great skills when it comes to showing such cool action in such tiny spaces! I tried to merge all these elements with what is my artistic background, American comics, and it was really fun! It’s very stimulating to keep studying, and try to create something that has never been seen before in comics!

Be sure to look out for The Rise of Ultraman #1¸on shelves September 9! Look for your local comic shop here, and keep checking back with Ultraman Galaxy as we continue to share all kinds of info and intel on your favorite Hero of Light!