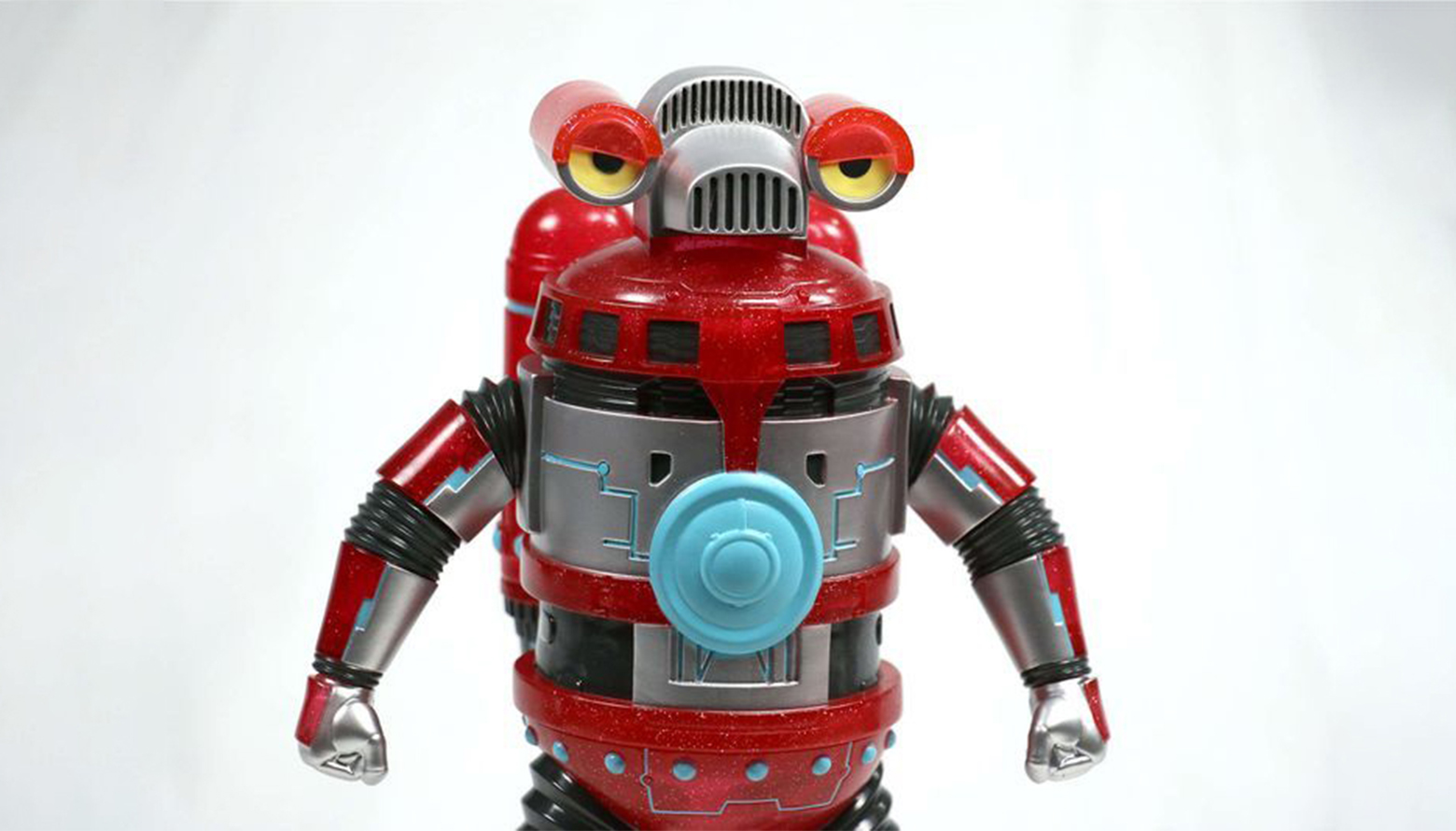 Sevenger stands 9 inches tall and is cast in premium red glitter vinyl with a metallic finish. The toy is meant to evoke Ultraman’s color palette, with a bright blue energy core simulating Ultraman’s ‘color timer’ to celebrate 55 years of the Ultraman series.

The toy has 11 points of articulation and offers a second set of eyes so you can swap Sevenger’s emotion from “sad” to “angry.” The toy also comes packed with a brand-new feature to the Ultraman Vinyl Odyssey series: a lucky trading card. Randomly inserted into each purchase is a special Sevenger trading card to add a unique touch to the figure! Sevenger is sculpted by Mike Lambert with header card art by DJ Crumrine.

“Sevenger represents a new step forward for us.” Seismic Chief Creative Officer Alex Rushdy explained. “It’s our most fully-featured toy yet, and we’re incredibly proud of how he turned out. To be able to celebrate the Sevenger character with a colorway celebrating the entire Ultraman series is something we are really excited about.”

Sevenger - Ultraman 55th Anniversary Edition is expected to ship by the end of this year with pre-sale now available for $200.00 USD + S&H. Orders can be placed directly from Seismic Toys, as well as some of your favorite soft vinyl toy Retailers.

In addition to the Sevenger announcement, Seismic offered glimpses at the next two figures in the toyline.

First was a sneak peek at Ultraman Tiga in his multi-type form. Sculpted by Mike Lambert, this figure will be released in 2023.

Next is Bemular- the first foe Ultraman faced on Earth. Bemular is designed by John Bellotti Jr of Robo7 and sculpted by Chris Hillseth of Last Bastion Studios.

pieces that will “shake up your collection.” The company is the brainchild of Alex Rushdy and

Tsuburaya Productions, the Japanese entertainment studio founded in 1963 by special

spark viewers’ imaginations, provide hope for the future, and cultivate kindness in young

viewers’ hearts” was the wish of the company’s founder. His words strongly express his

passion and attitude toward both creating a world which no one has ever seen, as well as

delivering warmth and kindness through his creations to all viewers.

Inheriting his desire, Tsuburaya Productions has evolved into a global entertainment

company providing content, products and services full of creativity and innovation to people

around the world. The goal is to build a brand that will not only fascinate viewers with the

enthralling Ultraman and Kaiju characters, but will also cultivate, enjoy and acknowledge the

virtues of “Courage,” “Hope” and “Kindness.”