SHIN ULTRAMAN ALIENS: WHAT ARE THE EXTRATERRESTRIALS?

WARNING: BY READING THIS ARTICLE, YOU WILL SEE SPOILERS FOR SHIN ULTRAMAN. IF YOU DO NOT WISH TO BE SPOILED, DO NOT CONTINUE FURTHER.

Last time we discussed the world of Shin Ultraman, we went through the secret files on the S-Class Species that hounded Japan. As much of a threat as those terrifying creatures were, however, they were hardly the only — or even the most dangerous — beings to cross the SSSP’s path.

The Extraterrestrials, though perhaps lacking the raw destructive impulses of the Kaiju, were both intelligent and dangerously powerful, manipulating everything around them in order to achieve their sinister goals. Though Ultraman is widely considered “Extraterrestrial No. 1” by the government of Japan, the Extraterrestrials of this list seek either dominion or destruction of humanity, placing them in an adversarial position to the Giant of Light.

First appearing to the SSSP shortly after the defeat of Gabora, Zarab heralded his arrival with a “subtle” show of force; namely, spontaneously appearing inside the high-security SSSP office and wiping the entirety of their servers and digital equipment. Though he feigned friendliness with the humans after this, and even repaired all the damage done with a wave of his hand, this was the first sign that “Extraterrestrial No. 2” was a threat and a deceiver.

With the ability to manipulate data seemingly on a global level, Zarab revealed his mission to trick humanity into wiping themselves out to Shinji Kaminaga shortly before kidnapping him, taking on the form of Ultraman to turn the people against their protector. However, though Zarab’s powers were particularly well-suited to Earth, he was in many ways a lesser threat to Ultraman than Gabora and was dispatched after an aerial battle by an Ultra Slash that bisected him.

The self-proclaimed “Extraterrestrial No. 0,” Mefilas is fundamentally responsible for most of the events of Shin Ultraman, having orchestrated a number of the Kaiju attacks on Japan for the sake of eventually coming to their rescue and indebting them to him. However, Ultraman’s appearance theoretically threw a wrench into that plan — until it didn’t, of course, with the giant’s tremendous power only helping Mefilas’ sales pitch to the government of Japan to accept his power in exchange for their freedom.

Eerily cool-headed and charming, Mefilas was a terrifyingly competent salesman and negotiator, with a quirk of regurgitating familiar human sayings in his speech. The alien’s intelligence and charisma were his greatest assets in his dealings with humanity and Ultraman alike, arguing for both to join him, and using compelling arguments and veiled threats to accomplish his agenda.

In the end, Mefilas’ goal, as stated, was in many ways formed out of watching Ultraman in action. By watching the combination of the giant Lipiah and the human Shinji Kaminaga into a third being, Ultraman, the alien realized the potential of humanity as bioweapons on the cosmic stage. He sought to monopolize humanity for himself before the rest of the universe descended on them.

He almost accomplished this, “selling” the Japanese government the mysterious Beta System before the SSSP and Ultraman stole it away. Before Mefilas could return his “product” to his “buyers” by beating down the weakened Ultraman, he was driven away by the appearance of a mysterious golden giant, and left Earth in short order afterwards.

Who was that golden giant, however? Next time Ultraman Connection looks at Shin Ultraman, we’ll explore this second Giant of Light. However, be warned, readers: this new giant is not so fond of humans as Ultraman, and he brings the end of the world with him… 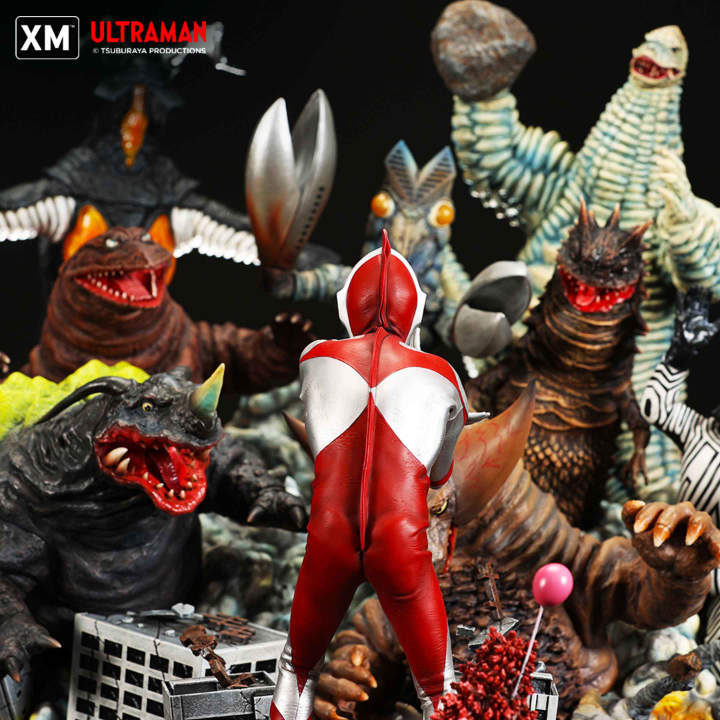 ULTRAMAN VS KAIJU DIORAMA FROM XM STUDIOS NOW AVAILABLE FOR PRE-ORDER . . .
Next