SHUWATCH! THE RISE OF ULTRAMAN #1 ARRIVESCOVER YOUR BASES WITH ALL MARVEL COVERS 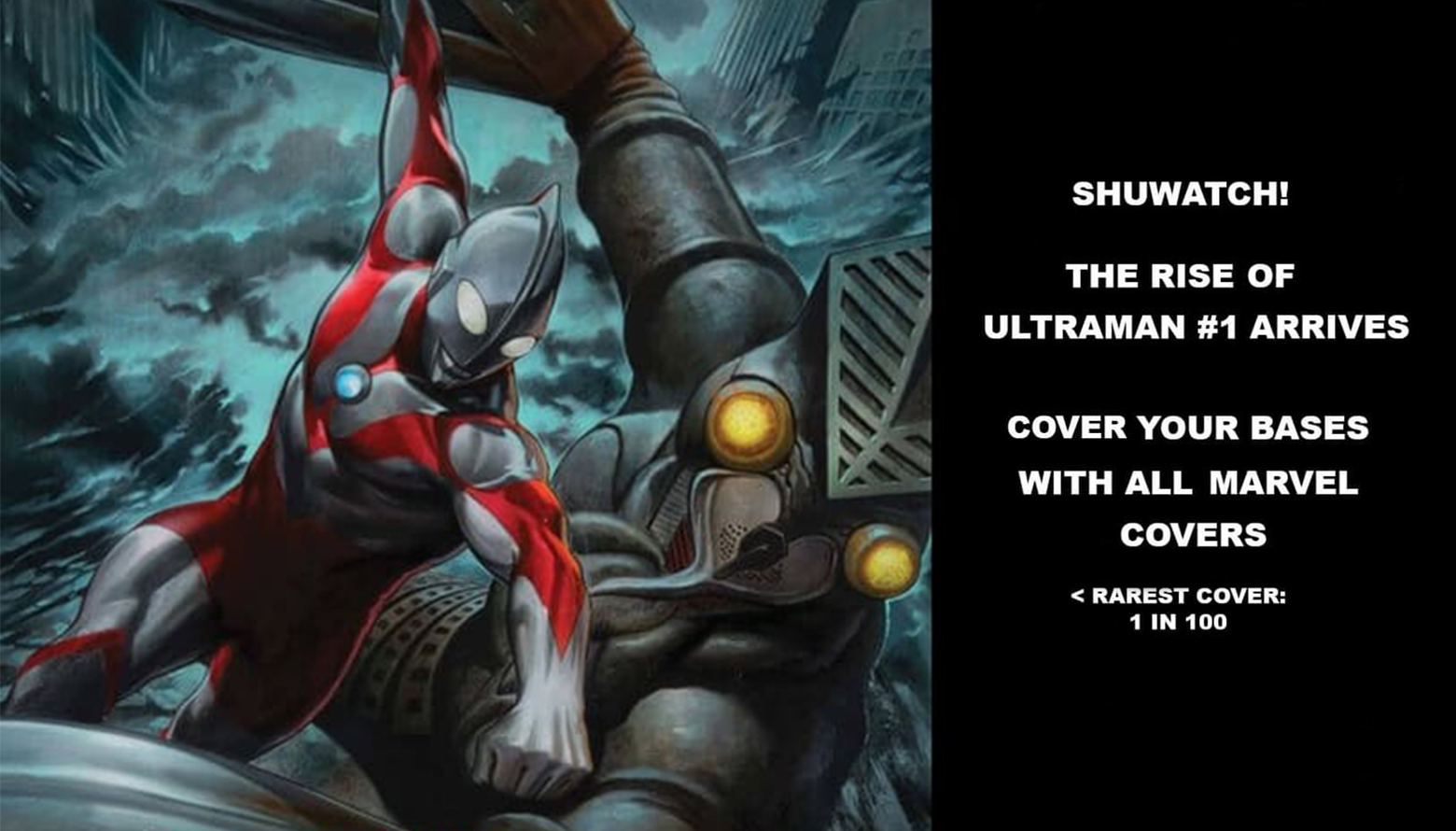 The Jet VTOL’s fueled, the K-Ray is operational, and the Beta Capsule is primed: The Rise of Ultraman issue #1 is ready to go! When you pick your copy up from comic shops everywhere Wednesday, September 9, you’ll have a stunning nine covers to choose from! (Note: Some will be scarcer than others!) We’re here to go through them all now to help you decide which one you want to take home…that is, if you don’t end up nabbing them all! And let’s celebrate with Ultraman’s iconic battle cry: “SCHUWATCH!!!”

This is the flagship cover, and with art by the inimitable Alex Ross, it’s no wonder! Featuring a realistic, gorgeously drawn Ultraman standing over a throng of astonished civilians, the style and scale promises the reader that a momentous occasion is waiting just a page flip away. To find out more about this cover, check out our previous article!

The first variant is an Ultraman-style spin on the classic Marvel Action Figures cover, drawn by John Tyler Christopher. Look to the fourteen points of articulation (a necessity to be able to make that classic + pose), a swappable Color Timer, a Spacium Beam, and an Ultra Slash: if only this toy could be found on shelves…maybe someday! Pick this gorgeous cover to add it to your Marvel Figure cover collection.

Next up is a colorful, eye-catching action pose by artistic titan Ed McGuinness! Fittingly, this pose, taken of Ultraman as he transforms from his host and partner, Shin Hayata, is called “The Rise.” McGuinness is a self-avowed Ultraman fanatic and has drawn a hero ready to take on whatever may threaten Earth. At only one in every 50 copies, this is a must-have rarity for your collection, but you’ll have to find it first!

Yuji Kaida is a legendary Japanese artist, known for his gorgeous, near-photorealistic art of various famous entertainment franchises such as Gundam, Godzilla, and, of course, Ultraman. One of two artists currently living in Japan to be selected to create special covers for The Rise of Ultraman, Marvel Comics Editor-in-Chief is a big fan and has stated that he is honored the Yuji Kaida accepted the assignment. This cover has a dark, moody feel: fitting, considering the subject matter. Fans are taken back to the burning ruins of the Classic-era SSSP headquarters, where Ultraman fought his final, desperate battle against one of the most powerful monsters ever to menace the universe, the dreaded Zetton. The sense of scale is immense, equally depicting danger and excitement. Only one in every 25 copies depicts this pitched battle, so if you see it, don’t miss out! Rest assured, more Japanese artists will be doing their takes on upcoming issues.

Skottie Young is known for a hyper-emotive, expressive style that’s often mixed with high-octane action. He’s successfully applied his skills to a number of different series and genres, from Marvel superheroes to comic book adaptations of the Oz series, and even his own (not for kids!) series, I Hate Fairyland. Here, that manic approach has brought to life a pitched battle between Ultraman and Gomess, the very first kaiju to appear in the Ultraman Series (or more accurately, its predecessor, Ultra Q.) Gomess looks a little… bigger than his most recent appearance (in episode 1 of this year’s Ultraman Z), but Ultraman is clearly undeterred, rushing forth to combat the destructive beast in front of the setting sun—a classic tableaux in the Ultraman Series.

Adi Granov is responsible for one of the most distinctive superhero designs in the modern age, having been the man who designed the eponymous suit for the 2008 Marvel Cinematic Universe entry, Iron Man. When he’s not helping to usher in multibillion-dollar movie franchises, he lends his talents to astonishing comic series…like this one, with a scene of terrible destruction—the flooded ruins of a city devastated by the dreaded Alien Baltan. Hues of dark blues and greys threaten the end of everything, but front and center, Ultraman, resplendent in silver and red, strikes at the Space Ninja to return light and hope to the world. This variant is the hardest to find (a 1-in-100 copy release), but it’s well worth the search!

Olivier Coipel is a French artist who is no stranger to drawing heroes. He’s responsible for the critically acclaimed Marvel mutant series House of M, as well as parts of Avengers Vs. X-Men. Perhaps that was why he was chosen to bring together two titans of the superhero genre for the first time, with Spider-Man himself sitting on the shoulder of his newest neighbor in the Marvel Comics line, Ultraman himself. Unfortunately, this meeting is just a what-if, as Spidey does not appear in the issue, and there are no plans to bring the Giant of Light into the main Marvel universe. At least, not yet…

What’s a better introduction to a new Ultraman story than a classic Ultraman story? Taken from Episode 33 of Ultraman, “The Forbidden Words,” this cover depicts the hero grappling one of his most dangerous foes, the insidious and cunning Alien Mefilas. This cover originated as a file photo from the archives of Tsuburaya Productions, and was lovingly restored for its Marvel Comics appearance by Starlight Runner’s own Creative Director Chrysoula Artemis. To see the episode that this cover is taken from, fans can pick up Ultraman: The Complete Series from Mill Creek Entertainment!

Our final cover is…well, blank! Perfect for autographs, art, and making it your own!

The Rise of Ultraman #1 goes on sale on September 9th, 2020, at comic shops everywhere. Use this website to find one today! No matter which cover (or covers!) you pick, the story within is guaranteed to satisfy, so don’t miss it!