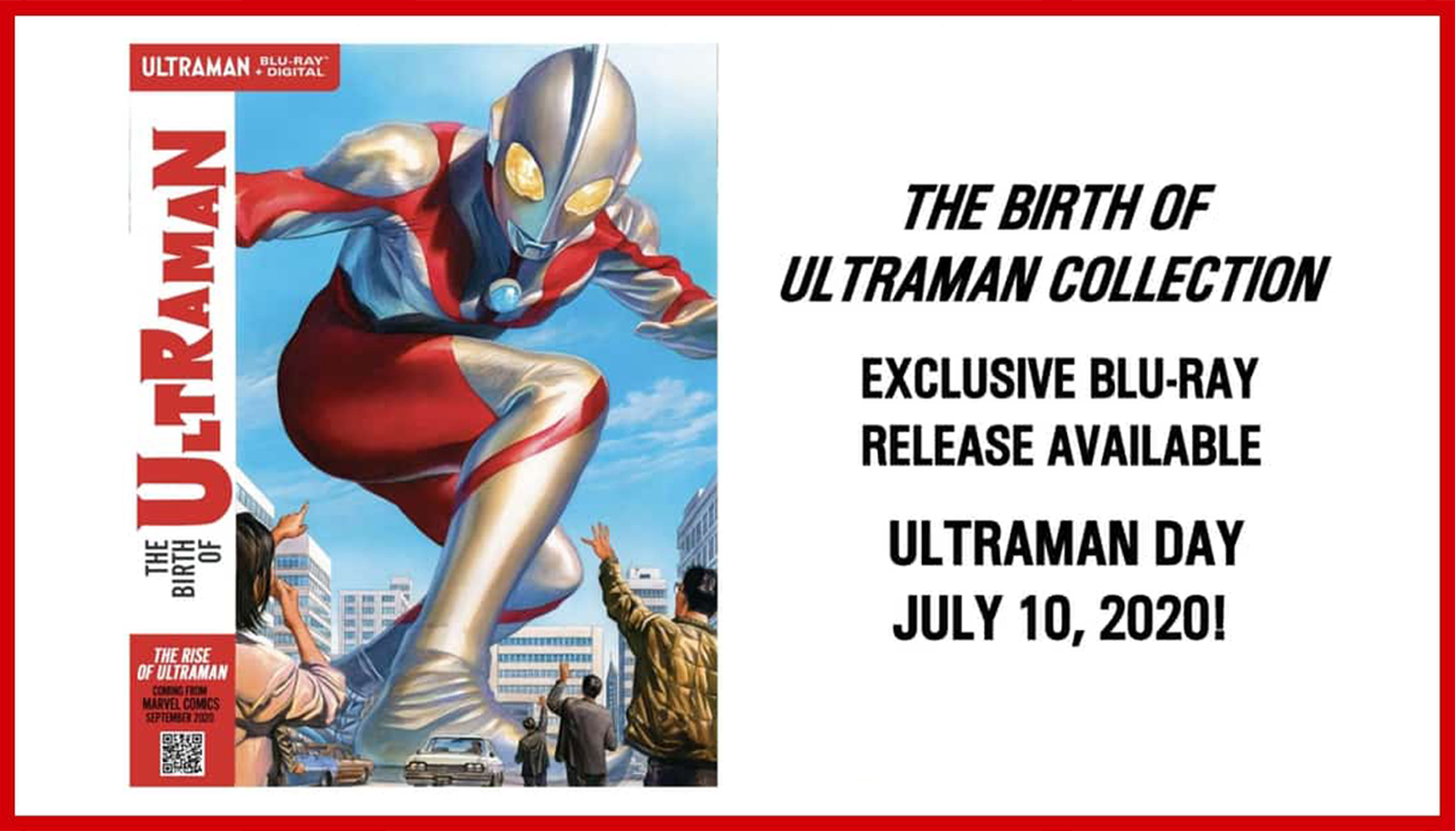 Mill Creek Entertainment is pleased to announce The Birth of Ultraman Collection, a Blu-ray set containing some of the best episodes of the original Ultraman series. It includes both the original Japanese language and the classic English dub audio tracks, plus the amazing video rarity: The Birth of Ultraman – Ultraman Pre-Premiere Special, the very first appearance of the hero that would become famous across the world as Ultraman.

This exclusive Blu-ray release also features art created by Alex Ross. This art is also featured on the first issue of Marvel Comics’ The Rise of Ultraman series, due out in September 2020, which is a collaboration between Marvel Publishing and Tsuburaya Productions.

In this new package, Mill Creek Entertainment offers a selection of Ultraman episodes in high definition video with DTS-HD Master Audio of the original Japanese soundtrack as well as the uncut United Artists English dubs. Each episode will also come with two English subtitle options; one for the Japanese audio and a second matching the English audio track.

The Birth of Ultraman Collection will include the following episodes…

Episode 1 – Ultra Operation No. 1 – Our story begins as the heroic alien Ultraman pursues the Space Monster Bemular to Earth, leading to a fateful encounter with Shin Hayata, an agent of the Science Special Search Party.

Episodes 26 & 27 – The Monster Highness Parts 1 & 2 – The only 2-part Ultraman story features the Ancient Monster Gomora, who escapes captivity and overwhelms Ultraman as it rampages towards Osaka.

Episode 33 – The Forbidden Words – When Alien Mefilas tries to convince a boy to give him the Earth, even Ultraman may not be able to stop him.

Episode 37 – A Little Hero – Ide suffers a crisis of faith as the Friendly Monster Pigmon warns that the evil creature Geronimon is reviving an army of monsters to destroy Ultraman and the Science Special Search Party!

Also included is The Birth of Ultraman – Ultraman Pre-Premiere Special. Airing in Japan on July 10th, 1966, one week before the original series premiere, this stage show was filmed before a live studio audience and introduced viewers to the story, cast, and characters of Ultraman. This initial debut of the Ultraman character on television is now celebrated annually and known throughout the world as “Ultraman Day.” Never before released in America, this presentation is presented in black & white in standard definition with Japanese audio and English subtitles.

The Ultraman series itself premiered on Japanese television on July 17, 1966 and was an immediate ratings smash. The North American rights were licensed to United Artists, who in-turn produced the English dubbing of the show. The English language version was syndicated to American television and went on to air in various markets across the country.

The Birth of Ultraman Collection Blu-ray will be sold exclusively on DeepDiscount.com as part of the launch of a dedicated Ultraman storefront that will offer up all of Mill Creek Entertainment’s current Blu-ray/SteelBook® releases.  Available July 10, 2020, the set retails for $25.99.

For July 10 only, Mill Creek is offering a discount of 20% for the Blu-ray.

Use the Code SPACIUMBEAM when checking out.