My journey as the Ultraman Noob began over a year ago when a friend loaned me The Rise of Ultraman Marvel Comics trade paperback. She knew I was an anime fan but that I might appreciate the book, and she was right. I was roped in by the electric aesthetic, engaging plotline, and what I felt to be truly virtuous message.

Since then, I’ve reviewed a plethora of Ultraman movies and series for Ultraman Connection, I’ve written releases on merch and events, and I’ve even gotten the opportunity to interview members of the online community for the site’s fan profiles segment.

I’ve felt nothing but support from the fanbase, especially from those who are far more seasoned than me. But with all the Ultraman content out there, I still have a long way to go before I can retire my Noob title! Even so, the opportunities that I’ve gotten to engage with enjoyers of this truly special franchise have been remarkable.

I was made more aware of this than ever during my trip to help produce the Ultraman Rising event at Anime Expo 2022 and appear on TV in Ultraman Rising! The TokuSHOUTsu Ultraman Day Special on the Shout Factory OTT network.

Traveling to Los Angeles for Anime Expo with the Ultraman Connection team was exciting all by itself, let alone getting an inside perspective on every aspect of the event. It all became real at the Opening Ceremony when the festivities were crashed by Kaiju and aliens!

But then to thunderous applause, Ultraman arrived on the United States mainland for the first time in history (yes, we know about him visiting you Hawaiians in the 1970s!) to fight them in front of a live audience, but alas a few monsters escaped…

Thus began the Kaiju Invasion in which the terrifying Dada and Alien Baltan rampaged through the exhibition hall each day of Anime Expo while our UCL Agents urged conventiongoers to help hunt them down for the chance to win prizes. Attendees were encouraged to take photos of the loose Kaiju and upload them with the hashtags #AX2022 #DADA in order to help the Ultras find them.

You could imagine my excitement to find that the grand prize for the Hunt for Dada was the gorgeous $850 PureArts statue of Anime ULTRAMAN battling Black King that I had previously written about for Ultraman Connection! Poor EJ had to haul that statue around to get it signed by co-directors Shinji Aramaki and Kenji Kamayama—it weighed like 30 pounds! (And yes, all you hunters, winners will be announced very soon.)

Amidst the chaos of the expo, the Bandai booth ended up being a place of refuge. Fans lined up and took photos with the beautiful, life-sized, classic Ultraman statue that stood firm at the Bandai booth. Not to mention the guest appearances by the authentic Tsuburaya Anime ULTRAMAN Suits such as Suit Ace and Suit Taro. Each day, a different Ultra Suit hero posed for photos and shook hands with adoring fans, me being one of them.

We saw many recurring fans visit each event, including the AX Cinema Nights event at the Regal Cinema, hosted by Iconic Events. Kamiyama-san and Aramaki-san sat for a panel after the screening of the theatrical version of Anime ULTRAMAN Season 1. I’m a huge fan of both of their work—the riveting Eden of the East was one of my earliest introductions to anime—so meeting them in person was truly a treat.

And who could forget the glorious main event? The 4000-seat venue was filled, some being eager Ultraman fans and some noobs curious to see something special. Thousands of eyes were glued to the stage as Ultra Heroes engaged in an elaborate battle with Kaiju. If that isn’t cool enough, it was all set to an awesome soundtrack produced by DJ Teddyloid. The audience erupted in deafening cheers whenever justice was served. It was exhilarating!

The cheers didn’t stop there, though. Nothing beat seeing the smiling faces in the audience of the Marvel Comics & Ultraman panel in which host Anna Vanston (who I watch on the New Rockstars YouTube channel), writer Mat Groom, artist E.J Su, and Ultraman Connection producer Jeff Gomez announced the upcoming comic book crossover between Ultraman and the Avengers.

Later at the Ultraman Connection panel, it’s a good thing former Ultraman Max cast member Sean Nichols was there. Without his gut instinct that the panel was in grave danger, the Ultras might not have made it in time to save us from yet another Kaiju attack!

Luckily, he was there and Ultraseven and Ultraman (backed by UCL Agents Bright and Hughes, played by the awesome actors Rick Jackson and Jaclyn Albergoni) saved the day and stuck around for photo ops and prize giveaways to honor the brave audience. This was the first panel I’ve ever been on and let me tell you, I was nervous!

I, of all people, am serving as a representative for a franchise so many different people hold near and dear?

Those nerves were eroded, however, by the influx of questions, comments, and recommendations everyone had for me. I always knew you Ultraman fans were a group of good eggs, but I was truly honored to be met with such respect and praise. Many can acknowledge that being a noob in most demographics is looked down upon, but it seems that the Ultraman family is much more focused on spreading the love than gatekeeping. For that I am truly grateful.

Production I.G & Netflix’s Anime ULTRAMAN closed off the panels for the weekend. Kenji Kamiyama and Shinji Aramaki returned along with the armored versions of the anime Ultra Heroes to take photos with eager fans. The Suits are truly marvelous, and fans were thrilled. I served mic duty running across the theater to take questions from fans and hand out prizes with EJ.

Finally, the Closing Ceremony had the entire Main Event Hall filled to overcapacity with over 4,000 people. My job was to take photos of the stage show, and when I looked back at the crowd it was breathtaking. The sheer scope of what Tsuburaya Productions and Iceberg Theory were doing really hit home with me.

Onstage, Sean expressed his appreciation for how so many people helped snap pics of the Kaiju so that the UCL can catch them. We would later learn that there were many thousands of social media posts tagging Ultraman and the Hunt for Dada! But then, the crafty Kaiju burst onto the scene in one final effort to take control of Los Angeles and turn it into (as Dada put it), Kaiju Land!

Everyone chanted and yipped as that familiar theme music started to play and both classic Ultraman and Ultraseven arrived to thrash and clothesline and beam those beasts back to the Kaijū Hakaba. To everyone’s delight on the Ultra Team, the Anime Expo hosts then awarded Ultraman the honor of signing the Daruma, a tradition of good luck granted to the top guest of the year. Ultraman and Ultraseven were present with Sean doing the signing. (I later learned that Ultras, even on stage, are imagined to be giant-sized and so cannot hold human items like Sharpies!)

Hanging out with Agents Bright and Hughes, getting chased by Alien Baltan and Dada in the dealer’s room, being interviewed by Mike Dent along with EJ and Jeff, and finally getting to see all our adventures and interviews compiled into Ultraman Rising! The TokuSHOUTsu Ultraman Day Special was like a fever dream!

The surrealism of it all was emphasized by the hilarious Spark Dolls Theatre skits and bits wedged throughout the show between the event coverage. There was also an exciting floor show during the special, featuring the return of those nasty villains the Absolutians, that used some special effects we hadn’t seen before here at Ultraman Connection. If you haven’t seen it already, I recommend the watch!

I thought being thrown into a real-life microcosm of the US Ultraman fanbase would be intimidating. But even though the event was mindbogglingly huge and the challenge of our team getting so many events and activations right was truly daunting, everyone at Iceberg Theory and Tsuburaya Productions came through. I even got to meet some of the actual Suit Actors, and they were so talented and friendly, I’ll never forget them.

At the end of the day, seeing the passion everyone there held for the Giants of Light reminded me what Ultraman is all about and why I was so drawn to this universe in the first place.

We got to see every conceivable kind put aside their differences and allowed themselves to let their imaginations run wild, be free with their bodies and personas, and be unapologetically inspired by something much bigger than their individual selves. I’d like to think this experience helped me learn to do the same.

The Noob is Evangelia Artemis, a New York-based writer and otaku who works on staff at Ultraman Connection. She is currently profiling Ultraman super-fans. Watch for her at upcoming UCL events! 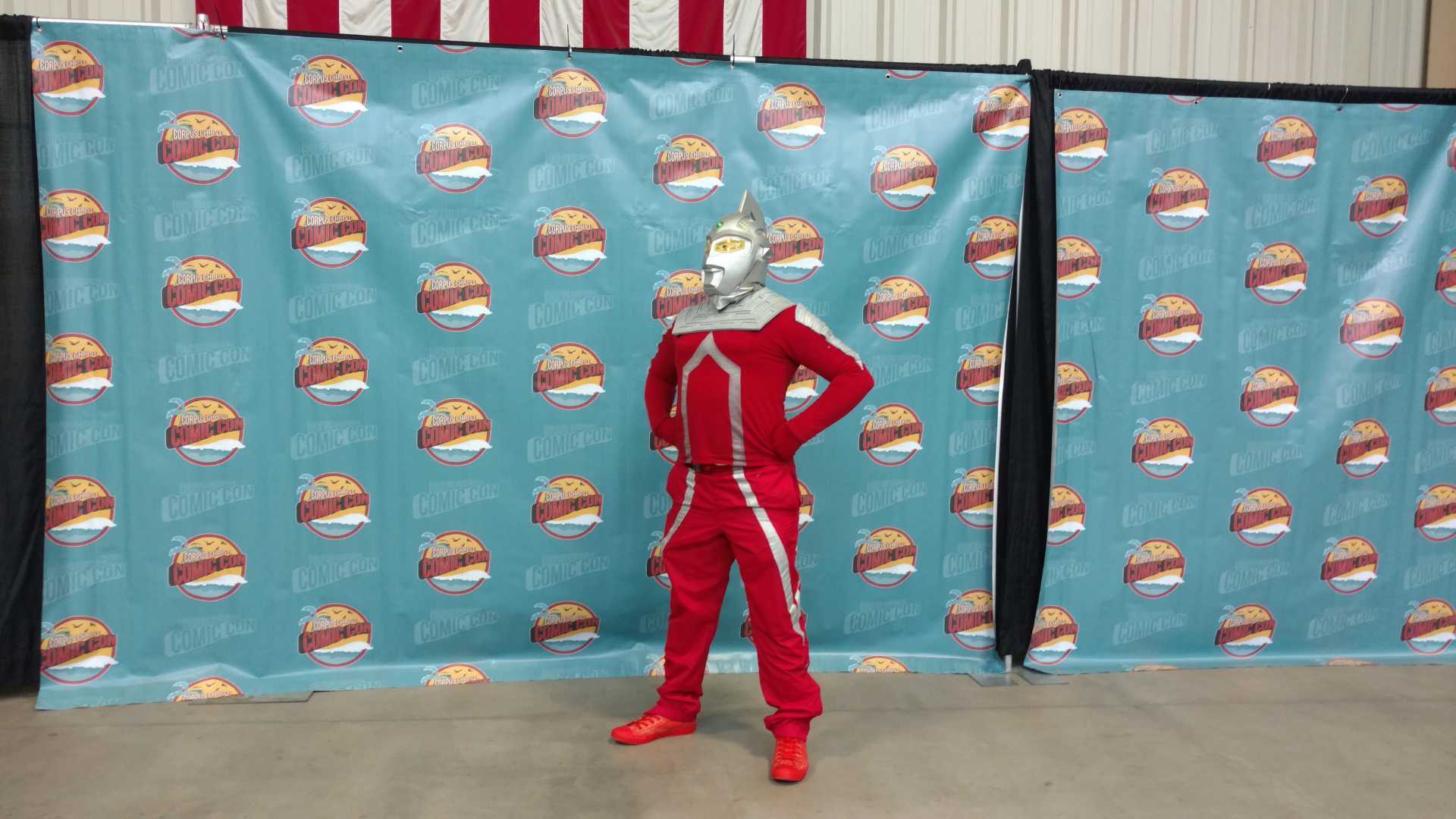 TOKUTEXAS COSPLAY SPREADS THE JOY OF ULTRAMAN . . .
Next 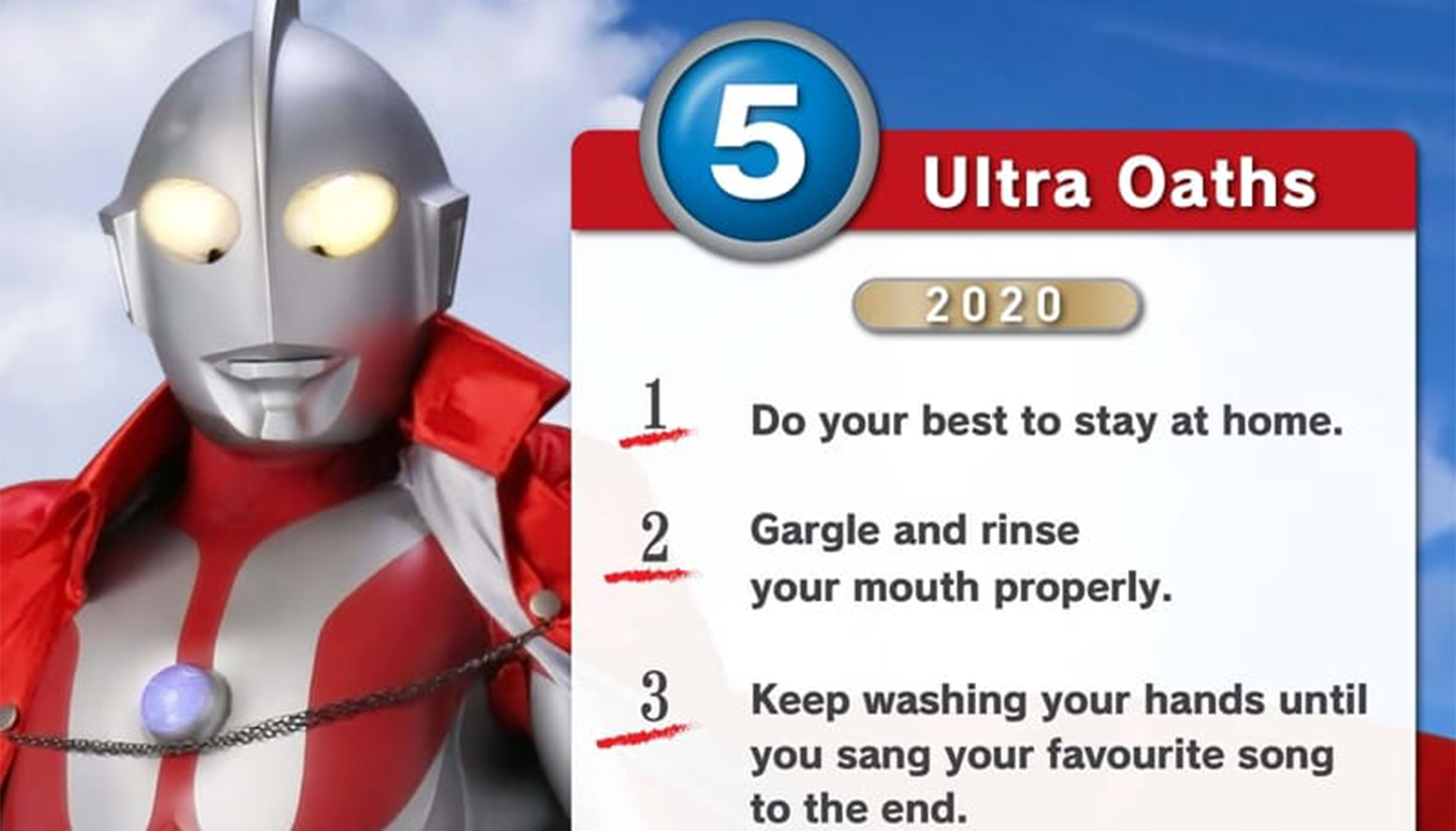