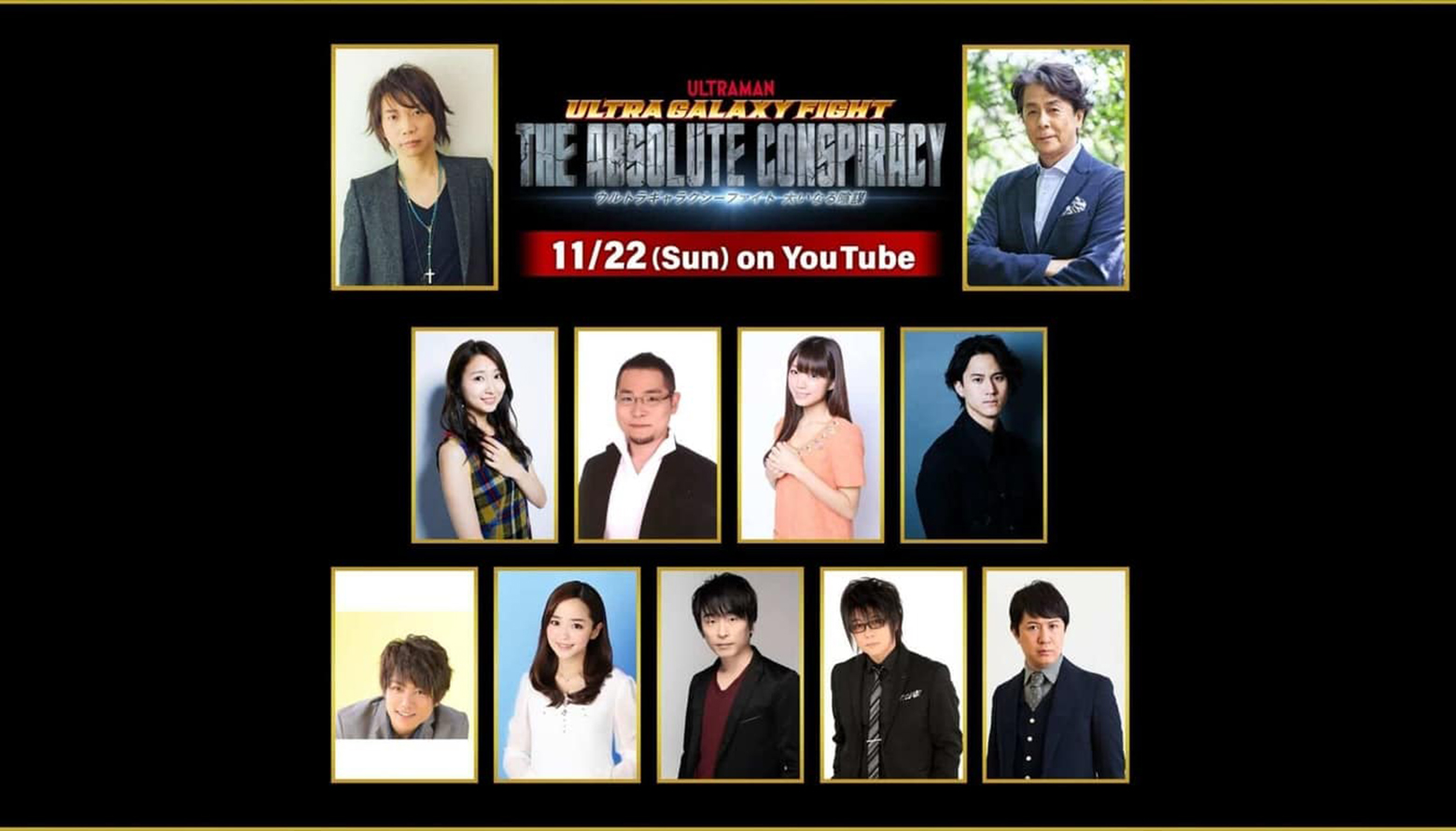 In the series, familiar Ultra Heroes from multiple generations throughout the universe must join in battle, one after another, in an ensemble piece that features everything fans could have dreamed. That dream is now a reality, with a three-arc story spinning a tale across the ages, even linking up with Ultraman Z, which is currently airing to rave reviews.

The series will begin on Sunday, November 22, 2020, with new installments planned to release on YouTube each week at 10 AM (Japan Standard Time) worldwide. Superstar voice actor Junichi Suwabe will make his first appearance in an Ultraman series portraying the mysterious new character Absolute Tartarus. In addition, Hatsunori Hasegawa, who played Ultraman 80’s protagonist Takeshi Yamato, will return for the 40th anniversary of the series to play the voice of Ultraman 80. Make sure to subscribe to the channel so you don’t miss a minute!

This mysterious being hides a terrifying power, plotting behind the scenes. Absolute Tartarus’s body is colored gold in contrast to Ultraman’s silver and seems to have designs on the Land of Light, but his true goal is a mystery. Traversing space and time, he carries out ominous operations behind the scenes in various eras while wielding a mysterious ability called “Narak.”

A quote from actor Junichi Suwabe:

“I’m Junichi Suwabe, the voice of Absolute Tartarus. To be able to be a part of the Ultraman series, which I’ve been familiar with since I was a kid… It’s very emotional! Personally, my favorites are Ultraseven, with its socially aware taste, and Ultraman Leo, which had the shocking development of annihilating MAC. I’m part of the generation that was traumatized by Silverbloome.

While recording this series, my eyes got hot as I saw each successive Ultraman appearing one after another. I think it’s inevitable that people of all ages will be able to enjoy this series. Who could the mysterious golden giant be? What does he want? Please look forward to it!”

Who is “Ultraman 80?” This hero believed that origin of monsters was the wicked hearts of human beings, Ultraman 80 saved the hearts of children as a junior high school teacher in order to cut them off at the source. After leaving Earth, he became one of the Ultra Brothers. Now he’s back to chase after Leugocyte, who attacked Yullian on Planet Kanon, before witnessing a climactic galactic incident.

A quote from actor Hatsunori Hasegawa:

I was honestly surprised when I received the offer to play the voice of Ultraman 80, but since it was a request from the reliable Director Sakamoto, I was delighted to accept it. When I received the script, I felt nostalgic because it had been so long since I was involved.

While recording, for the dubbing at that time Ultraman 80’s lines weren’t in Takeshi Yamato’s voice, so the recording this time was very fresh. It’s been a long time since Ultraman 80’s appearance. I’m thankful for the longstanding support, and I hope for your continued support.

The multitude of diverse characters that will appear in the story (as well as their fantastic cast of voice actors) has also been released.

Tsuburaya has also released the outline for the story, spanning 10 episodes in three arcs!

We open on Galaxy Rescue Force’s elite Ultraman Ribut during his days as a Civilization Guardian. Together with Ultraman Max, Ribut senses a strange presence on a mysterious planet: a trap set by an enemy seeking revenge! Max defends Ribut, putting himself in danger! But they’re not the only ones in peril! At the same exact time, the horror known as Leugocyte returns to assault Ultraman 80 and Yullian!

This is just the beginning of the “Absolute Conspiracy!” Will Ribut be able to save Max and put an end to this enemy’s threat? What is to come of 80 and Yullian’s battle? And who is Absolute Tartarus, the mysterious golden giant working behind the scenes?

Thousands of years before the events of Chapter 1, in the era of the Great Ultra War, there was a ferocious battle that unfolded between the Land of Light and Alien Empera’s monster army. Ultraman Ken (later the Father of Ultra) and Ultraman Belial fought to a stalemate in the course of that conflict; once heroes who stood side-by-side in struggles across the galaxy, Belial had grown unable to accept the distance between them as Ken became captain of the Inter Galactic Defense Force and won the heart of Ultrawoman Marie (later the Mother of Ultra). Belial began to seek even more power, behaving more and more recklessly…

Who should appear to spur on that conflict but the golden giant Absolute Tartarus! He whispered these fateful words, “Don’t you want to change your fate?” and indeed changed the fate of the universe.

Meanwhile, in another part of the multiverse, Taiga and the Tri-Squad are training across the galaxy after crushing their nemesis, Grimdo, only for “the one who controls Zetton,” the Space Fear-Demon Zett, to appear before them and attack! In the face of the seemingly endless Zettons summoned by the Fear-Demon, the Tri-Squad finds themselves in a desperate situation with no way out!

At the same time, Ultraman Zero and other heroes are devising countermeasures to oppose Absolute Tartarus, the golden giant pulling the strings behind the scenes. The newest member of the Inter Galactic Defense Force, Ultraman Z (Zett), joins his reliable senior Ultraman Mebius to face down this conspiracy—but at what cost?