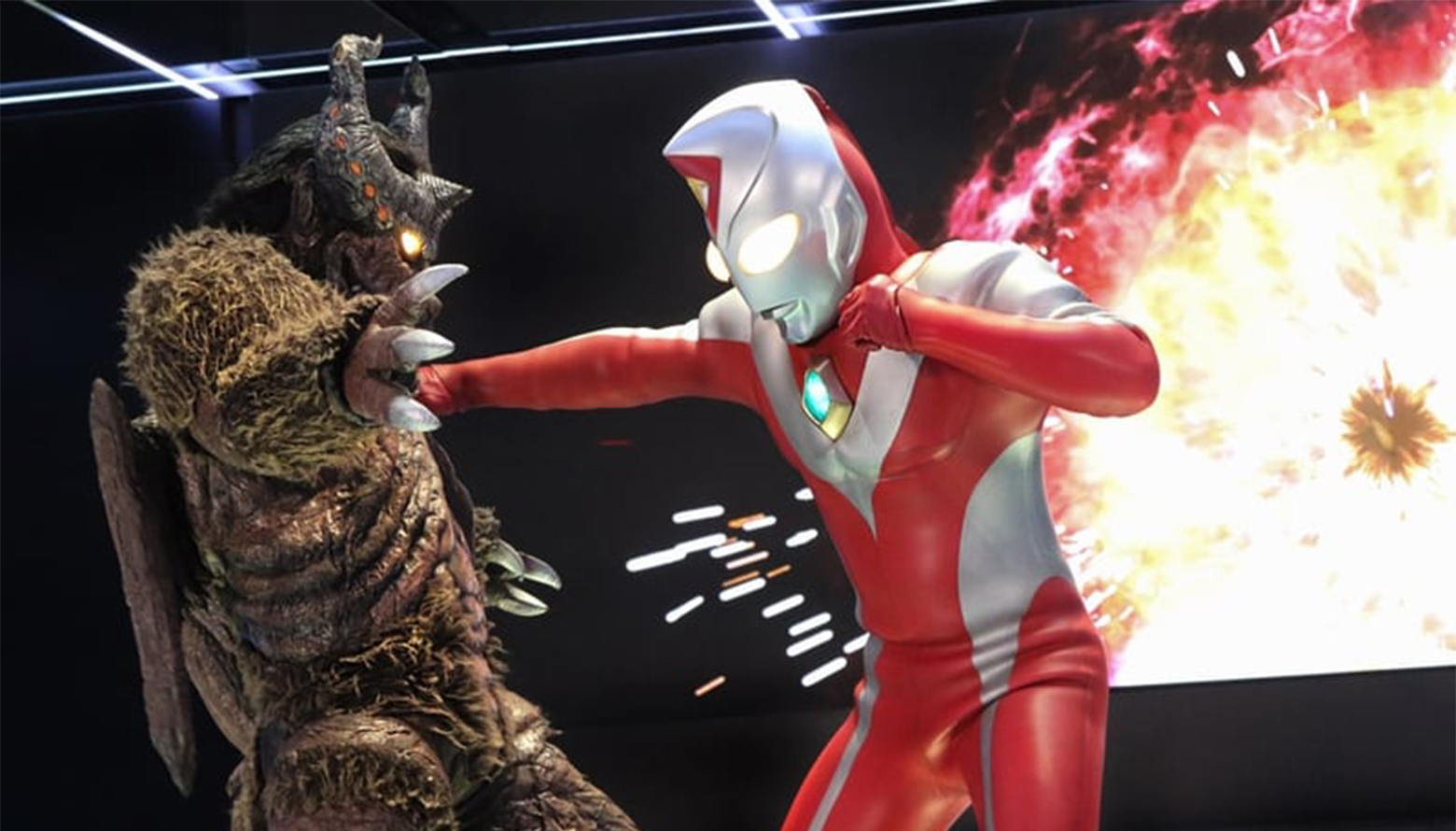 Kicking off the show in what has become a tradition for Ultraman Connection Live events was a CG animated introduction, hinting towards the future of the franchise and a larger plot unraveling within the greater Ultraman universe. We start in the cockpit of a spacecraft of the UCL (Unidentified Capture League), the Earth science team of this universe, which is based near Mars. The Captain is being given a mission briefing on the mysterious wormholes that have appeared in space since the sudden appearance of Absolute Diavolo in the previous Ultraman Connection event.

The wormholes are revealed to lead to the dimensions of Ultraman Dyna and Ultraman Gaia, and the pilot is preparing to mount an expedition to locate them. It’s implied here that Ultra beings are a major line of defense against menaces like Diavolo, and humanity needs help! But before the pilot can choose which portal to enter, he loses control of his ship as the wormholes blend—then the screen cuts to black. “Command…you’re not gonna believe this!” says the Captain.

That concerning note immediately contrasts with the beginning of the live show, where Sean Nichols greets the audience. The first segment of the show featured a panel with original actors from Ultraman Dyna and Ultraman Gaia. Nichols, best known for playing Sean White in Ultraman Max was the irreplaceable host as always. However, this time, Nichols was joined by guest host Maria Theresa Gow, the actress who played Georgie Leland on Ultraman Gaia!

The two hosts then introduced the panel of three guests: Takeshi Tsuruno (Shin Asuka/UltramanDyna), Takeshi Yoshioka (Gamu Takayama/Ultraman Gaia), and Hassei Takano(Hiroya Fujimiya/Ultraman Agul). Nichols and Gow then asked each actor about the productions of the shows, their journeys leading to getting cast, the work they’ve collaborated on, and more!

A highlight for fans was the new “ask question” feature in the chat, which allowed viewers to directly interact with the hosts and guests, asking about each of their Ultraman experiences and memories. The panel went in-depth into the guests’ relationships with their respective characters, as the three guests and Gow nostalgically reflected on their experiences working on the now decades-old shows, as well as the times they’ve revisited their characters since.

As the panel was wrapping up, the guests were suddenly attacked by a slew of Kaiju led by a Zenekindahlian, who stole the Ultraman Dyna and Ultraman Gaia DVD boxsets! Tsuruno then pulled the Lieflasher from his pocket and transformed into Ultraman Dyna! Accompanied by the Ultraman Dyna theme song, Dyna used his form change abilities to win the day, becoming Strong Type to overpower the Zenekindahl’s forces with his incredible strength.

As Dyna fought off the Kaiju, Satanbizor and Mimos appeared to reinforce the Zenekindahlian’s assault, attacking Takeshi Yoshioka and Hassei Takano. However, the two used the Esplender and Agulater, transforming into not just Ultraman Gaia Supreme, but the new Ultraman Agul Supreme!

The two together defeated the monsters, before being joined again by Ultraman Dyna. However, the battle was not yet won, as the Zenekindahlian summoned Five King, a titanic monster made out of some of the greatest threats to appear in the Tiga-Dyna-Gaia trilogy of TV series. With Five King towering over them, the Ultras started to struggle in battle, only to find themselves with an unexpected ally—Ultraman Trigger!

The four Ultras defeated Five King, but the Zenekindahlian, now desperate, summoned his final forces, dragging Hyper Zetton and Ultraman Orb Dark, both derived from some of the strongest entities the Ultras have ever encountered. The Ultras were not dissuaded by these great threats, and the battle was joined, Gaia and Agul clashing blades with Orb Dark, and Dyna using the boundless potential of his Miracle type to confound and assault Hyper Zetton. Finally, after a lengthy battle, the four Ultra Heroes were able to once again combine their powers to defeat Zenekindahl and his minions and save the studio!

There can no longer be any doubt: these Ultraman Connection Live shows are actually adding to the official canon of the Ultraman Universe. In Absolute Conspiracy, villain Absolute Tartarus used his power to traverse time and space to collect some of the most vicious Kaiju in history to engage the Ultras in a battle across the cosmos.

Since the finale of that series, we were introduced to an Earth that had never seen Ultras before but got a message from hope from—and our first glimpse of Absolute Diavolo—in Ultraman Connection Live: Ultraman Official YouTube Special and more recently, at the conclusion of Ultraman Connection Live Featuring Dyna & Gaia, we glimpsed what appeared to be Ultraman Regulos somehow trapped in deep space by the Absolutians! All of this, plus the appearance of Absolute Tartarus and Diavolo in recent episode of Ultraman Trigger, means that next year’s Ultra Galaxy Fight: The Destined Crossroads is shaping up to be a major turning point in the history of Ultraman.