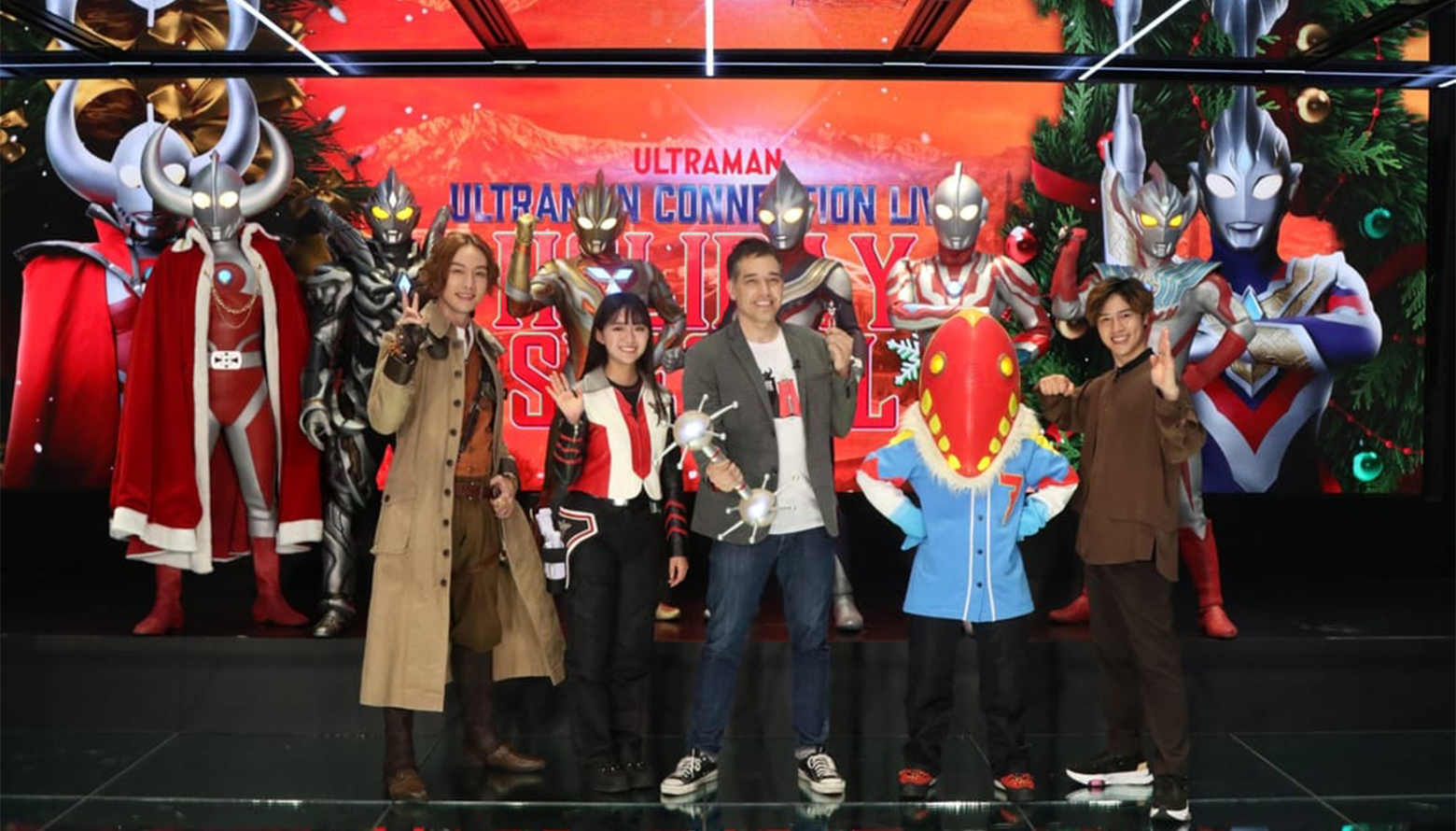 On Friday, December 17, 2021, Tsuburaya Productions hosted the Ultraman Connection Live Holiday Special, which featured heaps of seasonal surprises for Ultraman fans around the world. Before the show, fans were treated to the demo of a new mini-game set in the Ultraman universe, which continued the Ultraman Connection (UC) narrative that began in UC Live: Sevenger Fight! and has continued through all the UC Live events. Fans were then treated to a mind-blowing world premiere of the Ultra Galaxy Fight: The Destined Crossroad Prologue, before Sean Nichols kicked off the official show with interview segments with the stars of Ultraman Trigger, and continued to deliver many more merry surprises, including gifts for registered members of Ultraman Connection left by Father of Ultra himself!

The footage of the new interactive experience ran first, building upon the Absolutian threat seen in the previous Ultraman Connection Live introductions and stingers. In this reality, Ultras have not yet visited Earth, but Absolute Diavolo has appeared near it! The Unidentified Capture League (also abbreviated as “UCL”) was sent to investigate, even as energy waves caused by the cosmic battles between Ultras and Absolutians pummeled the Solar System. The UCL indeed discovered that there are multiple realities, even catching sight of Ultraman Dyna and Ultraman Gaia (depicted in a previous UC Live event).

Now we join a UCL soldier (the equivalent of a member of this universe’s proto-science patrol) as he investigates a space platform near Mars. As he lands in its empty docking bay, it becomes obvious that this structure is alien tech—and the yellow highlights indicate that it is indeed Absolutian. It seems the Absolutian menace has been jamming communications across multiple realities to further their conquest. The Lieutenant’s mission is to destroy Narak Tower, the jamming array on the platform.

As the game demo gets under way, none other than special guest Anna Vanston of the New Rockstars YouTube channel popped in to guide us across the level, as the Lieutenant sabotages the platform and seeks out the tower. In the end he is successful…but there are consequences! (Those will be revealed, both good and bad, in the outro at the end of the show.)

In a deft transition, we leave the end of the mini-game, where the Absolutians are left exposed, and dive straight into the stunning Ultra Galaxy Fight: The Destined Crossroad Prologue—which takes place largely in The Kingdom (Central Planet), the Absolutian home world! This is the very first time anyone is seeing this footage, meaning that viewers of the Ultraman Connection Live Holiday Special were the first people in the world to see it!

We start with Princess Yullian being held hostage in the same location as the bound Ultraman Regulos, and then get glimpses of The Kingdom and the Absolute Palace. Ultraman Belial and Ultraman Tregear are present, having been recruited by Absolute Tartarus against their Ultra brethren. We are then taken to the Land of Light, where several key Ultras (including some heroes who have rarely been seen in recent years) debate their response to the Absolutian threat.

Too much was shown to talk about here, but luckily, the prologue is exclusively available now for registered members of Ultraman Connection right here on the site and will begin streaming on YouTube and Tsuburaya Imagination starting December 27. Also available are the director’s cuts for the first two Ultra Galaxy Fight series, as well as more surprises revealed during the show…

The live studio section of the show began as always with host and former Ultraman Max star Sean Nichols, who introduced a very peculiar guest—Absolute Tartarus! Tartarus hijacked the show, even temporarily renaming the event Absolute Connection Live, and answered questions from the chat! Superfan @Klenda_V dared to ask Tartarus, “Why are you so handsome?”

To which, Tartarus answered: “Klenda! Klenda! You have potential! Someone like you must feel lonely on this planet full of Land of Light believers. You are always welcome in The Kingdom!” Klenda tweeted the video—including her hilarious response—and received over 600 likes and hundreds of retweets!

Fans continued to ask Tartarus various questions, gradually making him angrier, until eventually Shimba Tsuchiya, who plays the human form of Ultraman Ribut, arrived to fight him off.

He was joined by fellow Ultraman Trigger stars Runa Toyoda(who plays Yuna Shizuma) and Kei Hosogai (who plays Ignis/Trigger Dark). Hosogai surprised fans with his repeated use of fluent English throughout the panel, which allowed him to often speak directly to the Ultraman Connection Live audience without translation!

The cast then spoke with Sean about the making of the show, and their experiences working together, answering Sean’s specific questions, such as their most difficult moments filming, and who other than themselves has the role on the show they would most like to try. A highlight of the interview was a segment where the three actors drew the Ultraman Trigger scenes they would most like fans to re-watch!

Each of the guests got an Ultraman merchandise gift from Father of Ultra: An Ultraman Zero plushie for Toyoda, an Ultraman Belial hoodie for Hosogai, and an Ultraman towel for Tsuchiya! This was followed by the much-anticipated fan corner, in which the fans’ selected questions were asked to the panel!

This was followed by a surprise announcement from Terasaka and a trailer for Ultraman Trigger: Episode Z, a “special longer episode,” in which Ultraman Z is also set to appear as well as a new, mysterious dark version of Ultraman Trigger. The footage had a feature film quality to it, with leveled up special effects and an air of seriousness befitting a major event in the Ultraman universe. The special will be available to stream right here on Ultraman Connection in March!

Terasaka also confirmed that he will be joining the screening at an Ultraman Connection Live event in person.

Suddenly, Ultraman Trigger villains Carmeara appeared along with Hudram threatening Sean and the guests in the studio! Kyrieloid also appeared, using his power to summon Gazort. To face the threat, Hosogai and Tsuchiya used the Black Sparklence and GUTS Sparklence respectively, to transform into Trigger Dark and Ultraman Ribut!

First Trigger Dark faced off against Hudram, and then Darrgon and Toyoda took on Gazort. Then, a shocking fight between Carmeara and her Ultraman Tiga counterpart Camearra ensued. Absolute Tartarus then fought against Ultraman Ribut as Kyrieloid stole one of Father of Ultra’s gifts from Sean. Yes, we are aware of how bonkers this is, but it was also awesome!

After an intense melee, Ribut was able to fight off Tartarus. Kyrieloid tried to open Father of Ultra’s gift but using a figure of Ultraman Tiga that he had acquired earlier in the show, Sean was able to summon Tiga himself to fight Kyrieloid and protect the studio!

Finally, Kengo appeared onscreen and used his GUTS Sparklence to transform into Ultraman Trigger, who arrived in the studio! Ribut and Trigger fought Kyrieloid together and ended up facing Camearra and Carmeara as well. After a wild battle, the two Ultra Heroes were finally able to defeat their old enemies, ending the threat.

For the conclusion of the show, Father of Ultra and Ultraman Taiga appeared with a surprise for all the fans: Ultraman Taiga The Movie: New Generation Climax is now available to stream for free on Ultraman Connection! This is the first time the movie has been made available to international audiences(except for Brazil), and fans were stunned to realize it was here on the site for free. Although some fans may have experienced technical issues likely caused by Absolutian forces, all should be resolved now, so go check out the exclusive content and movie right now!

This ended the studio segment of the show, but the surprises were not done! After the credits, we got a live action segment starring TikTok star Ian Boggs as radio host Dan Hayashi, in which a caller to the show (voiced by Ultraman international producer Jeff Gomez!) mentioned a “strange glow across the night sky.”

Hayashi’s studio is suddenly buffeted by strange energies, and on his screens we see a strange symbol and some familiar Ultra Signs. Hayashi exists the radio station, only to see the strange blue pattern for himself. It seems the Ultras have realized that the UCL was successful, enabling them to freely communicate across the universe once more. This is their “thank you!” And this Earth has made first contact with the Land of Light!

But the segment also hits an ominous note: it seems the Absolutians are aware of who destroyed Narak Tower. That’s us!

That covers all the secrets and surprises from the Ultraman Connection Live Holiday Special. By the way, check out the Ian Boggs hoodie in the Merch Store, which boasts that amazing Galaxy Rescue Force symbol seen in the live-action segment!

Here’s a checklist of all the amazing exclusive contents, including the gifts from Father of Ultra on our site: