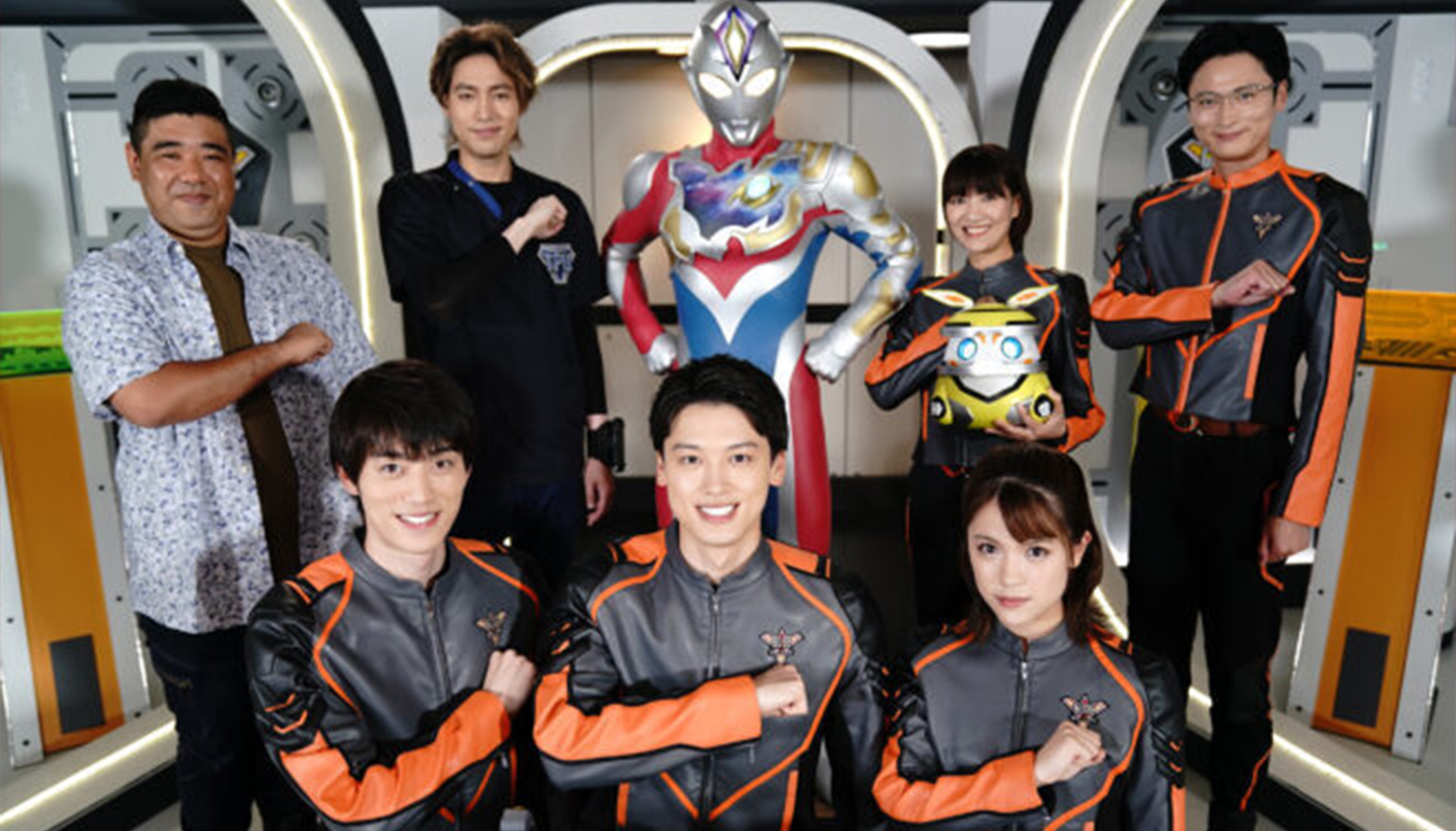 On Thursday, June 16th, a special Youtube event for the upcoming series, Ultraman Decker, was held, gathering the main director Masayoshi Takesue, and the main cast members of Daiki Matsumoto in the role of protagonist Kanata Asumi, Yuka Murayama as Ichika Kirino, Daichi Nobunaga as Soma Ryumon, Sae Miyazawa as Sawa Kaizaki, Yu Koyagani as Yuichiro Asakage, and Masaya Kikawada as Taiji Murahoshi. With the new series streaming soon, they spoke intensely about their passion for the show and its best points.

As a child I watched Ultraman Cosmos, and I was so happy to actually become Ultraman, when I was cast, I was so excited. Kanata is a straight-forward guy who always holds out his hand to those in need. Many people will go on to watch the show, and I hope that children can see Kanata and think “This hero is so cool”, just as I admired Ultraman at their age. I also saw the cool crew of the show giving their all to make the show, so I had to do my best, too. I can promise that you’re going to enjoy it, everyone gave it their all! Kanata is a cool hero, so I hope you enjoy his show!

Ichika is a girl who is always bright and kind, and stands up to any challenge. I’ve acted for a long time now and I always dreamed of playing a Tokusatsu heroine so getting to play one made me nervous “I’m finally on the set! The dream starts now!”. Ultraman has many fans across generations, so I want to be faithful to everyone’s expectations! The first videos I saw were very cool, I couldn’t take my eyes off it! I want to be someone who gives courage to others by fighting for them. I think you can enjoy the show not just as a Tokusatsu work, but also as a coming-of-age drama too, so I hope you enjoy see the characters grow!

It’s my first time to join a Tokusatsu drama, but since I was small I always wanted to be like the “hero that protects everyone”, so I’m very happy! Fighting monsters was scary at first, but as the show continued I found myself thinking “Let’s beat the monsters! Protect the people!”. I saw the latest trailer for the first time, but now I really can’t wait for it to start! Thinking that everyone gets to see it soon, I’m so excited I won’t sleep tonight! I hope the show is seen by many around the world, that they support it, and will watch over the growth of the three new GUTS-Select members!

When the offer first came I thought “A heroine, at my age?!”, but then I saw my role was vice-captain (ahaha!). I joined the Ultraman series just once ten years ago, and at the time I just recklessly fought my way through the show. But after 10 years I feel a new sense of purpose to try and portray the level-headed “older-sister” figure of the vice-captain. I hope seeing my subordinates grow gives everyone courage and hope! Please watch the show to the end!

12 years ago I joined Ultraman Zero The Movie: Super Deciding Fight! The Belial Galactic Empire. I was happy to return to the set and meet some of the same crew members, and I want to thank them for continuing to protect this Ultraman world. Usually I’m not very serious, so play a scientist was a challenge (haha). Please enjoy the show right until the very end!

I came to set feeling simultaneously happy to join the prestigious Ultraman world as a key figure, and pressured to fill the role of captain in such a prestigious series. I found that as I read the script, many of my lines aimed at the younger members also applied to myself. At first the three of them can’t even reply “roger” at the same time, but over time they found the timing, and now I can’t help but think “Ah, triplets!” (haha), took a look at that teamwork! Each and every scene is carefully written, and I would be happy if those watching will grow alongside us as you watch our performance.

Of everything I’ve worked on, this is the first story to center around the Defense Force members, so I put my focus on making their fight scenes impressive. Even in the first three episodes I directed the action is top quality! It’s only going to get better from there, so please pay attention to the upcoming scenes! I’m overjoyed that we’re almost able to deliver Ultraman Decker Episode 1 to you soon. Everyone brought all they had to the show, so please support it until the end!

The event also revealed the latest trailer showcasing Ultraman Decker and the main cast set to the opening theme “Wake up Decker!” (by SCREEN mode) and the Ending Theme “Kanata Toku” (by Hironobu Kageyama), as well as a new poster crowned with the show’s slogan “It’s now or never! I gotta do it now!”.

In addition, the event introduced the latest unmanned fighter craft used by expert team GUTS-Select, the GUTS Hawk. The GUTS Hawk piloted by AI Unit HANE2, can combine with the GUTS Falcon to create an even more powerful fighter craft, the GUTS Gryphon.

Viewers also saw Kanata’s transformation sequence, and witnessed the miracle of seeing him and Ultraman Decker in the same place and time.

Like all YouTube live-stream events, this online announcement event will be archived on the Official Ultraman Channel for your viewing pleasure.Furthermore, the live stream held on Tsuburaya Productions’ subscription streaming service TSUBURAYA IMAGINATION ended with a premiere viewing of episode 1 alongside the cast. We don’t want YouTube viewers to miss out, so we also plan to upload the footage from Episode 1 in our YouTube archives alongside the livestream.

Ultraman Decker will be broadcast on all regions with the TV Tokyo Network, and also viewable via on-demand and subscription-based streaming services.

The threat of monster attacks has faded, and the Earth seems once again at peace. Humanity turns its eyes to the stars and heads to space, while its monster attack countermeasures continue to shrink. It is in this new age when “Sphere,” an invading swarm of mysterious floating space objects, begin to attack Earth. Humanity loses contact with space and becomes a lone star. Their attack throws our hero Kanata Asumi’s peaceful life into chaos. Destruction spreads before his eyes and a giant monster appears. With no heed for his own safety, Kanata jumps in front of the enemy and transforms into Ultraman Decker.

Having gained the light of Decker, Kanata pledges to protect humanity’s daily life and joins the expert team GUTS-Select, newly reformed as an Anti-Sphere squad. As its newest member, Kanata and his fellow young, unseasoned teammates stand against these great enemies, together.