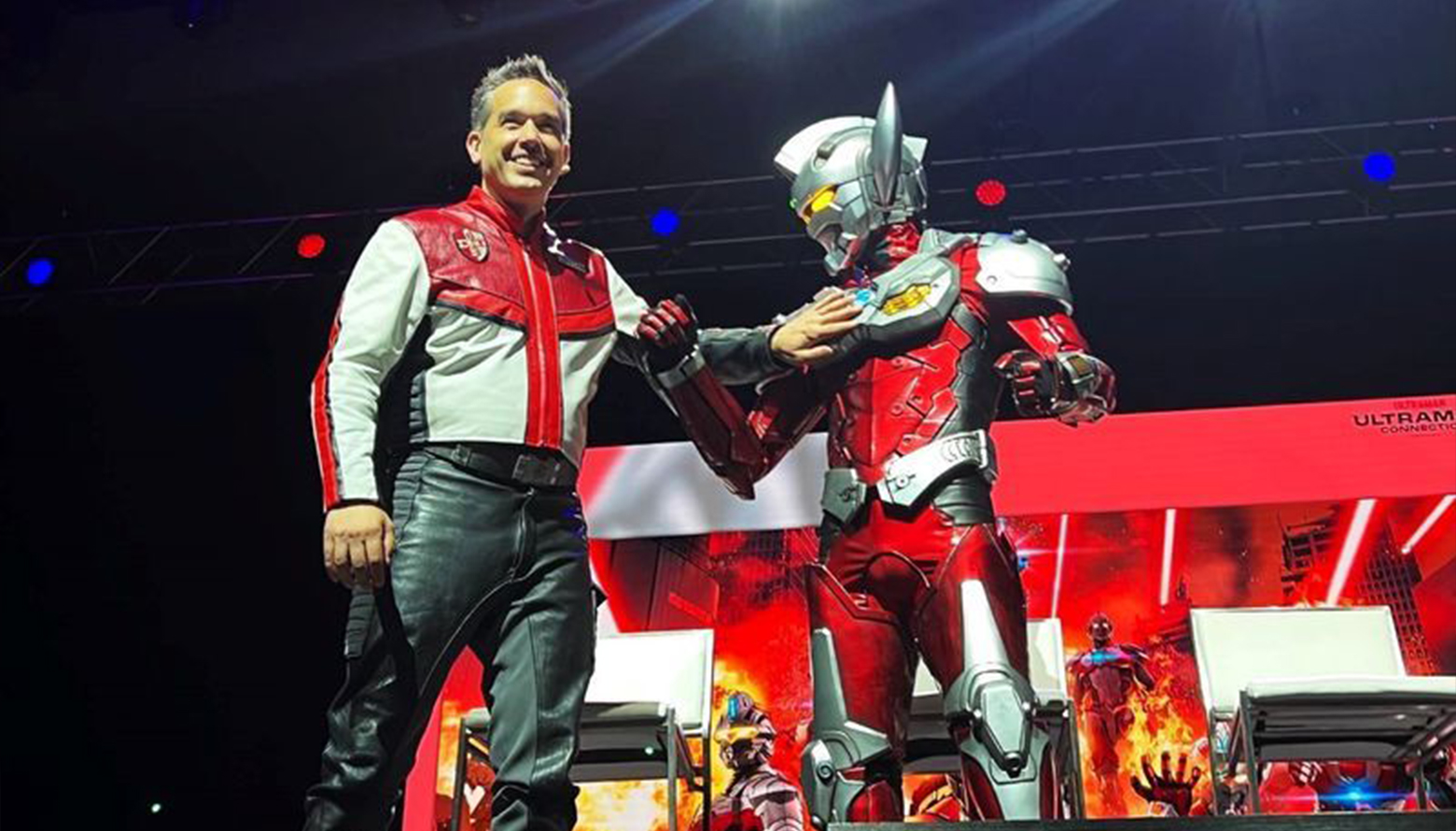 Celebrated Japanese icon Ultraman established a major presence for himself tonight at the Ultraman Arrives: Super Anime Extravaganza at the height of Anime Expo 2022. An escalation in the Ultraman Rising storyline running across the four-day convention at the Los Angeles Convention Center, the event was marked by a series of major announcements signifying a new global phase for the Ultraman franchise.

Set in the Main Events Hall, the nearly two-hour show hosted by Sean Nichols (of Ultraman Max fame) featured some of the most renowned directors in both Japanese anime and Hollywood animation, representatives from Marvel Comics, and even a deejay affiliated with the anime series. The event culminated with a spectacular live stage show battle between Anime ULTRAMAN heroes and nefarious alien agents—including the first time one of these suits has ever been seen in action.

The event began with a live battle between Ultraman and his legendary foes from 56 years ago, complete with the classic Ultraman series title swirl. Gomora, Bemular, and even Alien Baltan arrived onstage to menace Los Angeles for the very first time—only to be met in battle by Ultraman himself. The Giant of Light proved why even to this day, he remains the strongest.

From there, the show introduced Sean Nichols, perennial Ultraman Connection superstar host, who explained the breadth and depth of the titanic Ultraman franchise, starting with a huge reveal—a first look at images from the Ultraman full-length feature. This is a joint production between Netflix Animation and Tsuburaya Productions, animated by Industrial Light and Magic.

Director Shannon Tindle and Co-Director John Aoshima took the stage, and after enjoying a moment of freak-out at meeting Ultraman, showed an incandescent image of Ultraman leaping across the night sky over the Tokyo skyline in battle against a horned and armored Kaiju.

Fans were also shown an updated version of the film’s announcement key art, which depicts a ground-eye view of Ultraman firing his Spacium Beam. The image is now far more detailed, with missiles flying and smoke effects. The pair discussed their own history with the series, and how that love has carried them forward into making this massive original movie.

Next, the show moved from screen to page as writer Mat Groom, artist E.J. Su, and Ultraman Connection producer Jeff Gomez arrived to speak on the upcoming Marvel Comics miniseries, The Mystery of Ultraseven! With Sean, they spoke about how the Marvel version of Ultraman has developed through previous miniseries The Rise of Ultraman and The Trials of Ultraman to this massive new story. That wasn’t all, however, as the biggest news of all regarding Marvel was yet to come.

After an audience countdown, a piece of panoramic art by Francesco Manna was unveiled eliciting gasps and cheers from the crowd. In the piece there were three Ultras: Ultraman, Ultraseven, and Ultraman Taro—as well as three Marvel super heroes: Iron Man, Captain Marvel, and the spectacular Spider-Man! The Marvel heroes were engaged in battle with none other than Ultraman’s very first foe—Bemular!

This will be a major crossover miniseries, where at least three of Marvel’s Avengers will be entering the universe of Ultraman! Little more could be revealed, but one thing is clear: at least six of the world’s most famous heroes will be meeting for the first time in history in 2023.

After that, the sinister Alien Metron appeared, leering at the audience, and seeking to disrupt the event! However, Ultraseven himself arrived on the scene and engaged the strange menace, as well as his monster pawn Eleking! Though the giant was fighting two-on-one, he defeated both Metron and Eleking, allowing the show to continue.

For the final major segment, the focus returned to the world of animation, as the ULTRAMAN anime was discussed. After screening a montage of the coolest moments of the recently aired second season (still available on Netflix), Sean welcomed Kenji Kamiyama and Shinji Aramaki, the series’ directors from renowned anime studio Production I.G.

Kamiyama and Aramaki discussed their work, as well as the upcoming third and final season. Later this weekend, the pair will sign their autographs to the massive PureArts Ultraman Vs. Black King statue, the grand prize for Ultraman Connection’s Hunt for Dada event!

In addition, fans at the venue got world-exclusive footage showing the first look at anime ULTRAMAN Season 3. If you weren’t there, you won’t be seeing this footage for quite some time! Even wilder than that, the new Suit TARO was revealed for the first time live onstage at Anime Expo 2022!

Sean then welcomed DJ TeddyLoid, the famous producer responsible for a number of anime hits, including the theme song for Season 2, “3”, through his group NOILION. TeddyLoid revealed that NOILION will also be producing the final season’s theme song, and even shared a special message from the group’s vocalist, the mysterious LIO.

At that point, the show experienced one final interruption, as the sinister Black Star invaders suddenly arrived to take the convention, and the Earth, for themselves. All seemed lost… until the Ultra Slash tore through the darkness! In a flash of red and white, the heroes of Anime ULTRAMAN arrived, including the ULTRAMAN Suit, SEVEN suit, ACE suit and the never-before-seen in person TARO suit! After a furious battle, they defeated the horde of alien agents, putting the plans of the Black Star to rest once more. After that, the quartet held a victory stance to thunderous applause.

With that, the Ultraman Extravaganza came to a close, with Sean and the guests wishing fans worldwide goodbye. Don’t worry, though: More Ultraman events are coming all weekend long as part of Anime Expo.

And of course, there’s always some kind of threat lurking: in a stinger before the lights went up, the evil Dada was revealed from the shadows…! Remember, folks, The Hunt for Dada is still on!

For everything happening at Anime Expo and the Ultraman Series, stay close to Ultraman Connection!