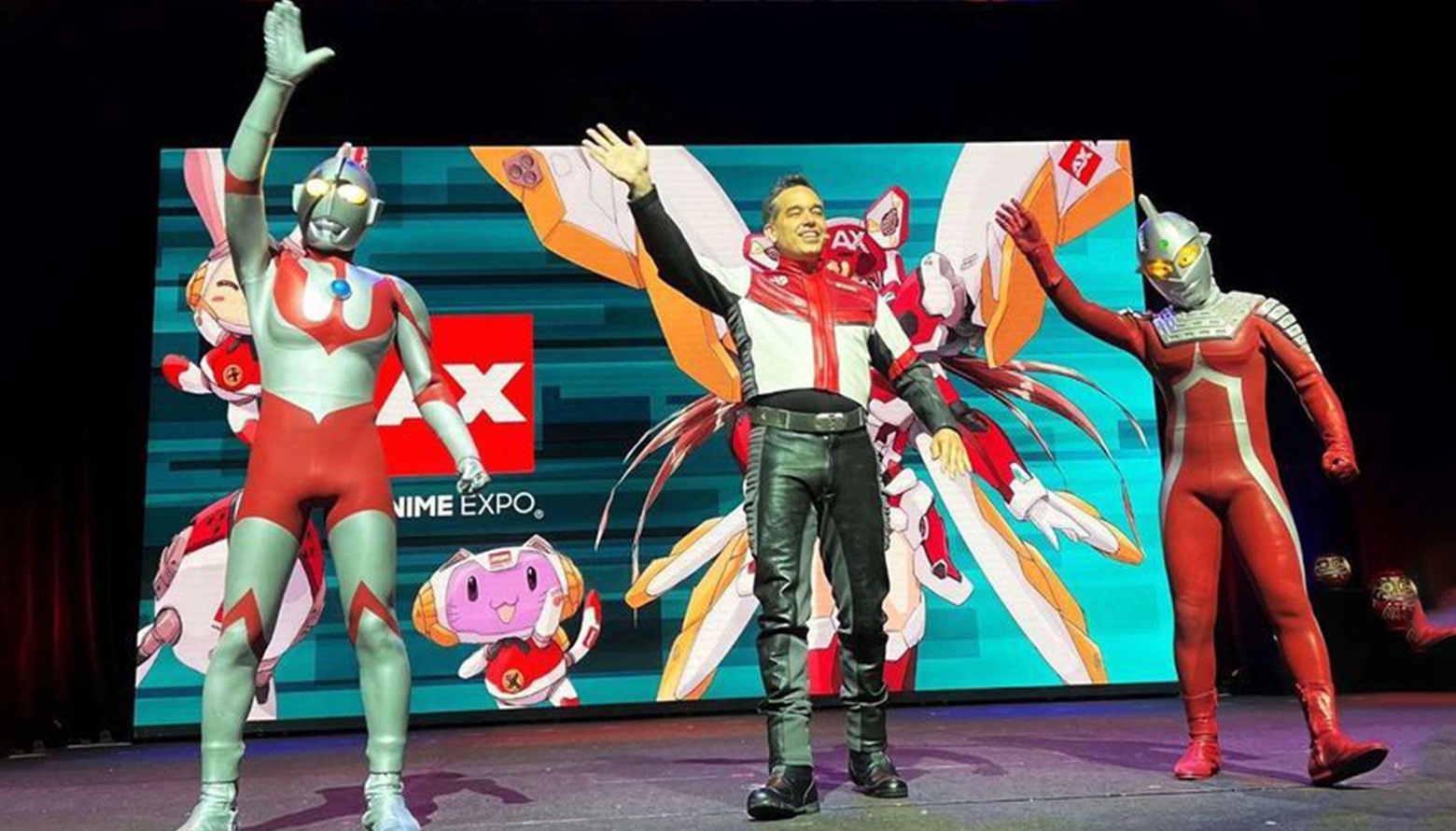 Sean Nichols, representing the combined forces of Tsuburaya Productions and Iceberg Theory took the stage before a cheering standing room only crowd of 4000 in the Main Events hall of Anime Expo 2022. His message: The Hunt for Dada is over!

Images of Dada and Alien Baltan floated across the rear screen, captured by cosplayers and fans throughout the Los Angeles Convention Center. The mission they were given at the con’s opener was to photograph and post images of the Kaiju so that the UCL can triangulate their locations and capture them. Nichols reported that the aliens were indeed held in check thanks to the efforts of thousands of new and established Ultraman fans.

But then, all hell broke loose! Dada stormed the stage, declaring that he has come to like this place and will conquer it as his own Kaiju Land, the first step in his plan to wrest control of the Earth from the UCL. Nichols led the audience in a chant to summon the Giants of Light, and to waves of roars from the crowd, both Ultraman and Ultraseven appeared.

Not to be outgunned, Dada summoned Eleking and the beetle-like Kaiju Zetton to his side, turning the confrontation into a five-way brawl.

The battle was brutal, but in the end, Specium and Emerium Beams were fired. All monsters were finally destroyed. Ultraman and Ultraseven stood triumphant!

Toward the end of the ceremony, something wonderful happened! Ultraman and Ultraseven, accompanied by Sean Nichols, was summoned back to the stage to be given the honor of coloring in the eye of a Daruma (closing it and hence releasing a wish) and signing it.

When seen close, the darkened section looks like and Ultra Eye! Clever Sean!

This is a tradition for special guests at Anime Expo 2022, and producers of the con stated that no one deserved it more this year than Ultraman. Since Ultras can’t really hold human objects, Sean did the signing with Ultraman and Seven looking on. A huge cheer went up, and Sean and the Ultras waved farewell.

The Closing Ceremony was the final chapter in the Ultraman Rising transmedia storyline that started with a bang at the expo’s Opening Ceremony when Dada and Baltan crashed the stage to claim Los Angeles in the absence of the Ultras. They were fended off by Ultraman himself, but they’ve been popping up in panels and hallways all weekend with UCL Agents Hughes and Bright in hot pursuit.

The elaborate Ultraman Rising storyline originated in a series of short films that have been bookending the monthly Ultraman Connection Live events that have been attracting thousands of international fans of the franchise. The series follows the adventures of the Unidentified Capture League as they struggle against alien threats in a universe where no Ultras have come to Earth. Their most recent foe was Dada, thought defeated after a battle in space. Clearly the UCL was mistaken.

On Saturday night’s Ultraman Extravaganza on the Main Events stage, Dada appeared in a stinger at the event’s conclusion warning us that Ultraman will ultimately be defeated before Anime Expo is over! Clearly, Dada was not good to his word. Across the entire world—Ultraman has risen!

Anime Expo 2022 was just the first step in the Ultraman Series’ expansion into global pop culture, but the 10 Days of Ultraman have just begun! To see what comes next, you’ll have to stay close to Ultraman Connection!