ULTRAMAN Z BECAME THE FIRST SERIES IN FRANCHISE TO FEATURE AN ONLINE EVENT AND COMMENTS FROM THE CAST! 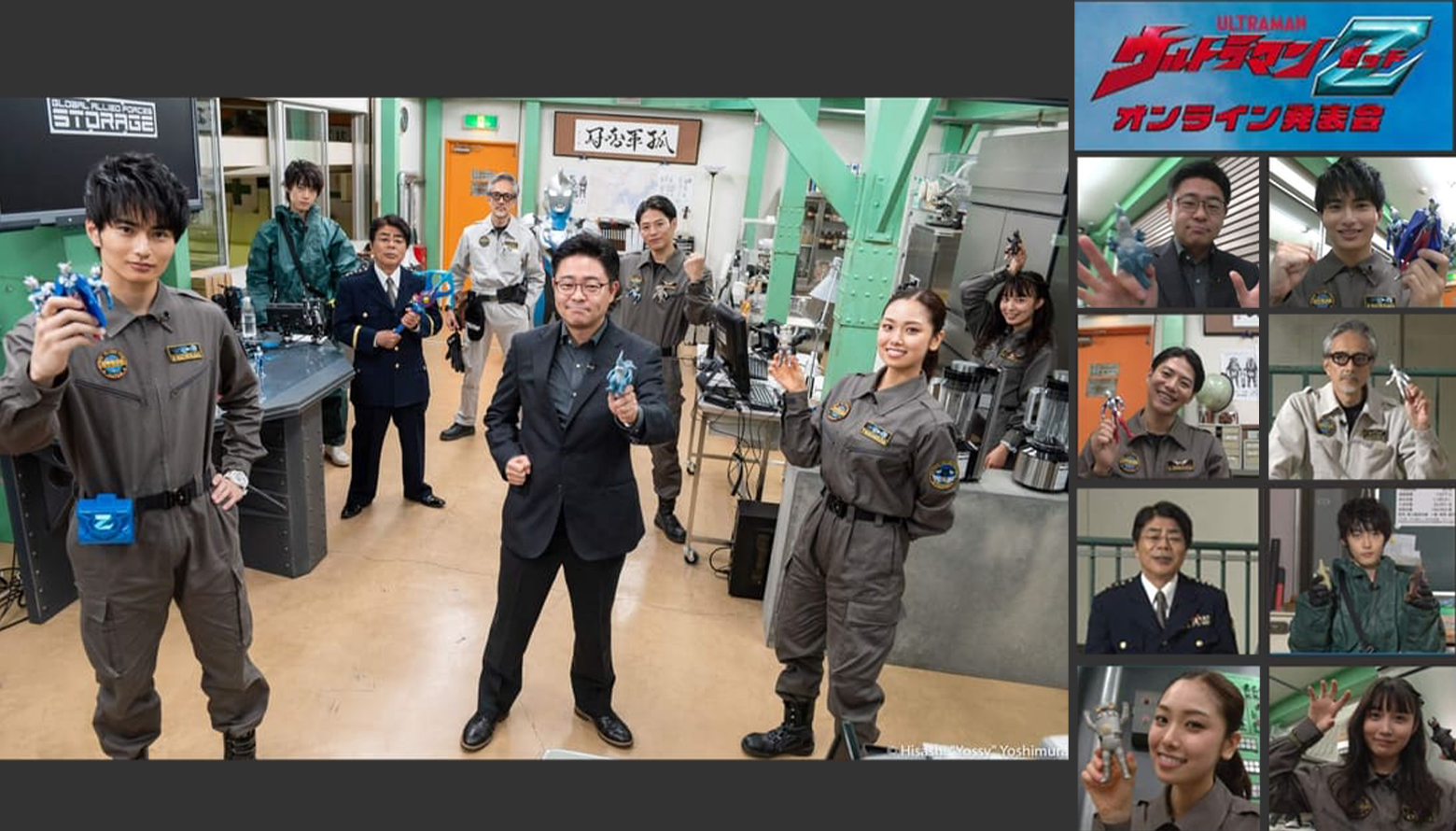 The last series in the Ultraman franchise, Ultraman Z (Zett), will begin airing Saturday mornings at 9 AM on TV Tokyo and other TXN Network channels in Japan, starting on June 20th, 2020. That’s just the beginning as we march toward this year’s Ultraman Day on July 10th!

On June 5th, for the first time in the series’ history, producers held a live online event to celebrate all things Ultraman Z!

Keeping social distancing in mind, the cast and crew of the show got together on the special set for the Anti-Monster Robot Unit “STORAGE.” Our main character Haruki Natsukawa (played by Kohshu Hirano), was joined by Yoko Nakashima (played by Rima Matsuda), Yuka Ohta (played by Hikari Kuroki), Shota Hebikura (played by Takaya Aoyagi), Shinya Kaburagi (played by Rihito Noda), Kojiro Inaba (played by Jun Hashizume), Director Kuriyama (played by Hisahiro Ogura), and our main director, Kiyotaka Taguchi. Everyone spoke about their excitement for the project and how the series was created despite the pressures of the time, from social distancing to changing production schedules.

Alongside the cast members, Masaaki Endoh (who sings the opening theme song) and Nami Tamaki (who sings the ending theme) participated. Even Ultraman Z himself also showed up in the event.

You can watch the two special productions here:

I hope viewers will be excited to watch Zett and Haruki grow along with each other. Each cast member has a great personality. The series has an exciting story, great costumes, and so much to see, which I hope everyone will enjoy. Also, Haruki and Zett are both passionate! VERY passionate! Let’s cheer on the series together every Saturday morning!

While Yoko is an ace pilot, her regular personality is a little clumsy. I would love for everyone to enjoy this “gap” in Yoko’s personality. Ultraman Z is for sure going to be awesome and exciting. All of the cast members are very excited to be working on this series, so please stay tuned!

Seeing the special movie for the first time, I thought the scene with the sunset was beautiful and stunning. Yuka has a lot of knowledge about Kaiju, so I hope everyone will pay more attention to Kaiju. Let’s make every Saturday fun and happy for everyone!

I was filled with excitement when I saw Sevengar in action. I adore Sevengar, almost like my own child. His soft eyes are very similar to mine. I hope to spend time with everyone treasuring each moment. Just as I was given hopes and dreams by Ultraman, I hope every child who watches Ultraman Z will grow up to be an adult who treasures their dreams.

I wonder how everyone will view Hebikura as a captain, but as an ideal captain, I hope to play him as someone who has the same perspective as his team and not as someone who is demanding.

STORAGE has two teams. The Special Airborne Armor team and the maintenance team work very well together, and with that teamwork the shooting goes very smoothly. Even though the world is going through a very difficult time that affects every one of us, all of the staff and cast members are striving together as a team to keep this series moving forward. Please cheer us on as we race through until the end.

Please watch closely as Kaburagi becomes the host of a parasitic lifeform, and keep an eye out for all the cool costumes and gas mask. I am getting excited as I realize the airdate for episode one is getting closer. I have very high hopes that Ultraman Z will be an amazing series, and I can’t wait to spend time together with everyone.

I am very happy to be able to sing the ending song for Ultraman Z. The ending song is fast and has power along with a sentimental melody, which expresses the main character’s journey as he battles and struggles, but lives powerfully. I hope the viewers will listen to the song as they follow along with the story.

I worked with Kota Fukihara, our screenwriter who tragically passed away, two years ago on a midnight drama series. After that, I fell in love with his personality and his attitude towards work, and we became very good friends. What we can do now in memory of him is strive to make the story of Ultraman Z the best it can be and dedicate this piece to him.

Because we are going through a difficult time, the cast and staff members are creating this series with as much enthusiasm and fun as possible. I think viewers can also feel this sense of enjoyment.

I can’t wait for this series to go on air so everyone will get to watch it.

Premise: Shards of evil called “Devil Splinters” have been scattered across space, throwing the galaxy into chaos. Ultraman Z, a new member of the Inter Galactic Defense Force who sought out Ultraman Zero as a mentor, has come to Earth while chasing the ferocious space monster, Genegarg. The planet is not without its own defenders, however: the Anti-Monster Robot Unit “STORAGE” has been formed to face down the horrors that have begun to appear on a daily basis.

In his first battle, Zett merges with Haruki Natsukawa, a new pilot of STORAGE. Together, they must rise up to protect the peace and save humanity! However, behind the scenes the parasitic lifeform known as Celebro has set a terrifying plot into motion…