WHO IS ULTRAMAN TARO? 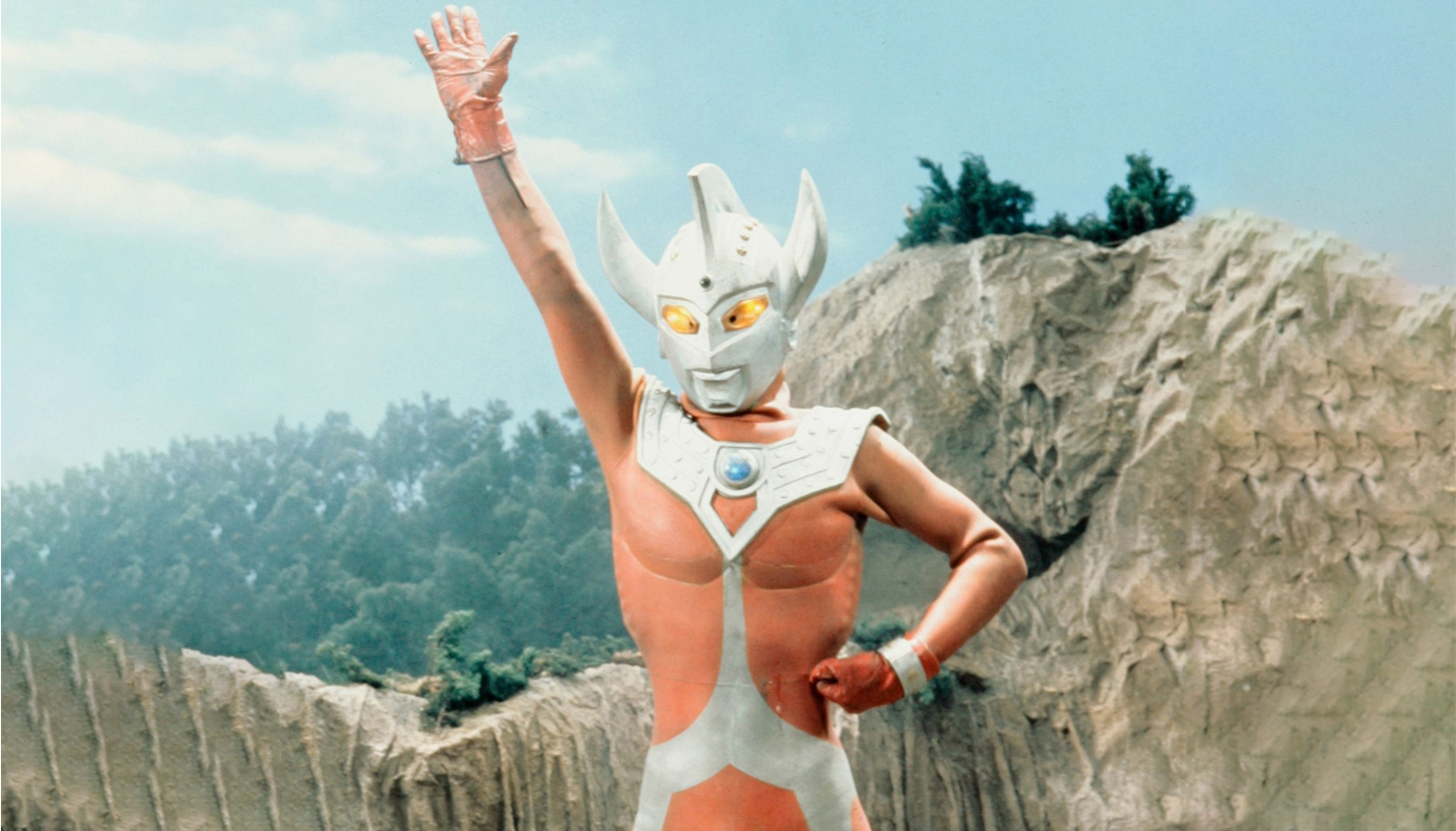 Ultraman Taro, both the show and the eponymous character, occupy a very special place in the Ultraman Series, in the lore of the series itself, as well as the hearts of fans worldwide. Debuting in 1973, Taro worked to help expand fans’ understanding of the Land of Light, establishing a number of major characters who have since come to help define the cosmology of the franchise, all while telling a sincere story about growing up and defining who you are.

The story begins as many entries in the Classic Ultraman era do, at the crossroads of disaster and heroism. A young aspiring boxer, Kotaro Higashi, has returned to Japan after working abroad, bringing with him little more than the clothes on his back and some small curios, including the seed of the mysterious Tigris flower, said to bloom only once every century. He has only just planted the seed nearby when the peace is destroyed by the arrival of a Terrible-Monster, one of the Alien Yapool’s enhanced Kaiju creations.

The beast, Oil Drinker, seeks to destroy the shipyard Kotaro has just left, and consume the oil within the cargo freighters at dock. Kotaro rushes back as the new defense team, ZAT (Zariba of All Territory) engages in their first major sortie. Using a crane to grab the monster, Kotaro helps ZAT to drive it off, and the creature escapes. After accepting the gracious thanks of the dock workers for help, Kotaro returns to find that the Tigris flower has already bloomed! And unbeknownst to him, after he falls asleep outside nearby it, it continues to do so…

That night, ZAT notices the monstrous growth of the plant after a vine attacks one of their vehicles, and their attempts to destroy it wake Kotaro, who is horrified by the destruction of his flower. Beating up the defense team members in a straight fight, the struggle stops when Oil Drinker returns.

As ZAT runs off to engage it, Kotaro realizes that they were right to try and destroy the Tigris, as it lifts into the air, revealing its true nature as the Kaiju, Astromons! The monster plant kills Oil Drinker by eating it, and Kotaro feels compelled to stop this new, far-greater threat, since it came from his flower. Battling it on foot, Kotaro is brave, but that boldness ultimately gets him badly wounded when the creature flings him off. However, that action does not go unnoticed, as a woman in green finds him the next morning, giving him a certain “charm,” the Ultra Badge, for his efforts.

Knowing he cannot stop Astromons alone, Kotaro joins ZAT, but when Astromons returns, even their incredible technology cannot stop the beast, and Kotaro’s plane crashes in a fireball after the monster retaliates. But Kotaro is not killed. Instead, he is carried away, all the way to the Land of Light by the Ultra Brothers! These include all the previous Ultras in the franchise, including Ultraman, Jack, Ultraseven, Zoffy, and Ace. There, to save his life the unconscious Kotaro is merged with the newest of the Ultra Brothers, Ultraman Taro—and from the flames of the crash, the sixth giant leaps out! Taro attacks Astromons, beating it back with quick, frenetic attacks. Though Astromons is a tough foe even for an Ultra, Taro manages to defeat it with his signature attack, the Strium Beam!

This begins Taro’s tenure on Earth, with Kotaro and Taro growing together in their struggle against forces that would seek the destruction of humanity. Staying with the Shiratori family, the patriarch of which captained the ship Kotaro returned to Japan on, the wandering Kotaro starts developing real relationships with both the young son and adult daughter of the family, Kenichi and Saori, as well as his teammates at ZAT.

Meanwhile, Taro’s family is close by as well, with the identity of the lady in green who gave Kotaro the Ultra Badge—his tool to become Taro—being Mother of Ultra, one of the leaders of the Land of Light. She also happens to be Taro’s mother! In addition, his brothers-in-arms, the Ultra Brothers, as well as his father, the mighty Father of Ultra, are prepared to come to Taro’s aid whenever they are needed.

That isn’t to say that Taro isn’t exceptionally powerful on his own. Taro is gifted with incredible abilities, many of which exceed even his fellows. Though his signature attack is the rainbow-hued, T-shaped Strium Beam, the best known of Taro’s techniques is the literally explosive Ultra Dynamite attack, where Taro detonates his internal light in a tremendous explosion capable of annihilating any threat. However, this technique more than any other has a tremendous cost to Taro’s body, making it only suitable in life-or-death situations.

Thankfully, against most threats, Taro has dozens of powerful tricks and attacks, including the mighty Atomic Punch, and the fast-spinning Ultra Spout. In a pinch, when all six Ultra Brothers are together, Taro can even merge with the others to become a Super Ultraman, an unstoppable force for good!

Taro also has an arsenal of specialty tools that can rival even the weapon-master, Ultraman Jack, thanks to a gift from Mother of Ultra, the transforming King Bracelet. Compared to the original Ultra Bracelet, the King Bracelet’s transformation abilities are vastly more specific and sometimes even a little quirky, becoming things like a monster muzzle, and even a bucket of water to splash on a drunken monster!

Such varied techniques and tools are necessary against the threats to Taro, which mark some of the strangest and most creative creatures to ever grace a television screen! We’ve told you about Astromons, but other memorable creatures to face Taro include Mukadender, the centipede-like monster capable of splitting its body in two to attack from multiple sides, Alien Temperor, the would-be universe conqueror who required all the Ultra Brothers to defeat him (alongside his advisor, a cymbal-banging monkey!), and even the moon-derived Mochiron, who was only quelled after Taro and Father of Ultra, pounded enough mochi to feed him!

There were two Kaiju who fought Taro that have become not only memorable, but infamous, over almost half a century since their first appearance. The first is Birdon, a monster bird so vicious and powerful thanks to its brutal poison and fire breathing abilities that it did the unthinkable, and killed not just Taro, but Zoffy, when the older Ultraman came to his aid! Though the two were resurrected by Father of Ultra, there has rarely been a monster so dreaded and dangerous to the Giants of Light before or since.

The other truly legendary threat is the chimeric monster known as Tyrant. Made of a whopping seven monsters, Tyrant combined all the most dangerous features of those various threats, including the Skull Monster Red King, the Space Monster Bemstar, and the Terrible-Monster Baraba, into a single unstoppable threat that defeated all the previous Ultra Brothers before Taro was able to avenge them.

Perhaps the most iconic fight of Taro’s career is his final one. The threat started normally enough, with the space fisherman Alien Valky and his pet Shark Whale arriving on Earth with a plan to conquer humanity through command of the seas. Before any such plot could be enacted, Taro defeated the aquatic monster and drove Valky away. Though this was not particularly memorable as far as threats go, it was, shockingly, the last one Kotaro would choose to fight!

The young man concluded that Taro had started to become a crutch for humanity after the death of his patron and friend, the sea captain Shiratori. Returning the Ultra Badge to the Land of Light, Kotaro prepares to return to his human life…only for the escaped Valky to return now that the Giant of Light is gone. Such a fight should be desperately one-sided, with the physically superior alien ending poor Kotaro’s life. However, Kotaro has been growing and learning alongside Taro during his career defending Earth. Using the terrain and his wits, Kotaro can, in a sign of growth from his first failed attempt against Oil Drinker, destroy Valky, saving humanity without the power of Ultraman.

This is a microcosm of the greater point of Ultraman Taro, one of personal growth, and specifically, entering adulthood. Kotaro and Taro alike are talented and smart but are too inexperienced in the beginning to solve the problems in their lives by themselves, and must be helped, by the Ultra Brothers, by the Shiratoris, and by ZAT. It is only by going through these trials and learning from their mistakes that they grow, and by the end of the series, Kotaro no longer needs Ultraman’s power at all to win. Hence, Taro has become a fully-fledged Ambassador of Light, a skilled warrior that will pass down the lessons he has learned to the next generation, especially the young fighters of the New Generation Heroes, like Ultraman Ginga and his own son, Ultraman Taiga.

Since Ultraman Taro aired in 1972, the story concepts introduced by the series have grown to become defining pillars of the franchise. From Mother of Ultra’s introduction to the mention of the great conflict that would in the modern era be identified as the Ultimate Wars, which introduced threats like Alien Empera and Ultraman Belial, it is the story of Taro that perhaps most of all has made Ultraman what it is today.

Fittingly, Taro himself has remained a key figure in the greater series. Though Kotaro has never returned, the giant himself is a revered figure in the Land of Light, a teacher and father, and has fought many of the greatest threats faced by the Ultras, including his close childhood friend-turned-nemesis, Ultraman Tregear in Ultraman Taiga: The Movie - New Generation Climax. If you want to see this legendary battle yourself, go get an Ultraman Connection membership right here on this site, and catch the movie, free, in our Exclusive Videos section. And for more on Ultraman Taro, and the entire Ultraman universe, stay close to Ultraman Connection!